By SCOTT ANDREWS
November 1, 2002
Sign in to view read count 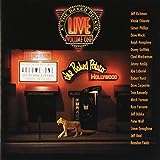 These two CDs feature twelve tracks of live fusion culled from guitarist Jeff Richman's gigs at the "new" Baked Potato club in Los Angeles during 1999-2000. The list of semi-famous fusion players on the covers, including Vinnie Colaiuta, Steve Tavaglione, Dave Weckl, Dave Carpenter, Simon Phillips, and Danny Gottlieb, make this look like another Tone Center fusion "project" band that was thrown together in the studio and recorded before the all-star members had to go back to their real bands. However, as Richman's liner notes detail, the list of players just represents some of the LA fusion musicians he booked as the ad hoc band lineups for his regular live gigs at the Baked Potato. Many of these shows were recorded, but the players had no idea that they would ever be released.

The two Baked Potato CDs present highlights of originals and standards played by Richman's various live bands. Although each CD contains only six tracks, many of these are extended live explorations and jams, so both still clock in over an hour. Most of the tunes are Richman originals, which are solid compositions, in addition to single songs written by drummer Simon Phillips and trumpeter Jeff Beal, who both play on their tunes, Marcus Miller, Jan Hammer, the Peter Gabriel 'new standard' "Mercy Street" that Herbie Hancock covered, and the Gershwin classic "I Got Rhythm." Both CDs contain a mix of tracks by six different lineups, cleverly spreading out the lineup variety on each CD.

The music bounces along with an electric jazz feel, with plenty of walking bass lines and ride cymbal work, only occasionally diverging into more strident 60s fusion type sounds. The renditions of "Mercy Street," Phillips' "Dreamscape," and Richman's "Kamaroon" particularly stand out from some of the slower tempo Richman originals. Richman's sharp tone and scratchy guitar style run as the only consistent thread through all twelve tracks, effectively supporting the background rhythm when necessary and stepping up to the forefront when appropriate.

These musicians are not as famous as the players in many of the Tone Center studio projects, but none of those bands were interacting live in front of an audience like the Baked Potato lineups. Fusion, like the jazz it is descended from, takes on an extra spark and life when played live, with the band members interacting and responding to an audience. Although the original songwriting is nothing landmark, both of the Baked Potato CDs have a live spark that the Tone Center studio projects just don't have, stretching and developing the tunes, and you can hear the members of the different bands interacting.

Richman and Co. aren't blazing any new ground in playing or writing here, but they do give skillful and relaxed live performances of original tunes and a few standards. Both volumes of Live at the Baked Potato are great examples of really good live playing, completely pure since they had no idea it would be released. Live at the Baked Potato sounds like a really good local jazz fusion band, if you're lucky enough to live in a city that even has such a thing. If you're not, pick up both volumes of Live at the Baked Potato and chuck them in your CD changer, and you'll get a two hour set of solid fusion that crackles with live energy despite the lack of any superstar players or writers.