Riverloam Trio: Live At The Alchemia 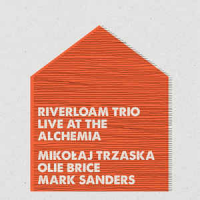 Recorded at Krakow's legendary jazz club, Live At The Alchemia constitutes the third outing from what has become a perfectly-balanced unit, following the eponymous Riverloam Trio (NoBusiness, 2012) and Inem Gortn (FMR, 2014). Although, traditionally, Polish reedman Mikolaj Trzaska might be seen as the apex of a musical pyramid, supported by the solid foundation provided by the British pairing of bassist Olie Brice and drummer Mark Sanders, in actuality this is more of an equilateral triangle in which each of the parts assumes equal importance.

One of Poland's most accomplished improvisers, Trzaska has featured alongside American multi-instrumentalist Joe McPhee on the excellent Magic (Not Two, 2009), and with reedman Ken Vandermark's Resonance Ensemble, as well as leading over 40 dates under his own name. Brice and Sanders, both high profile stalwarts of the UK scene, amount to an in-demand rhythm section in their own right, fuelling the likes of saxophonists Tobias Delius and Rachel Musson.

They unite on six installments of audacious free jazz culled from live performance. An emotionally-direct player, Trzaska brings something of Peter Brötzmann's raw energy to the alto saxophone, by turns vibrant, urgent, astringent and passionate, as he develops reiterated throaty vibrato-laden figures into incandescent streams. But he also possesses a more nuanced side which he reveals during passages like the delicate percolating multiphonics at the start of "Vegetal Execution," while the command of melody and rhythm central to his expression is nowhere more obvious than on "Exercises In Water."

Brice alternates between counterpoint and pulse, but wields his bow for an outstanding solo shaded by finely-judged silences between phrases in "Vegetal Execution." Meanwhile, Sanders supplies momentum-filled timbral variation. Together they enjoy a near telepathic connection, where they know what each other is likely to do almost before it happens. Just listen to how Sanders instantaneously uses a chiming cymbal strike to mark the bassist's switch from robust pizzicato to rasping arco during a lovely reflective interlude on the otherwise fiery "Cloud Store/Hard Snore."

Elsewhere, the trio utilizes arresting changes of pace to engender intensity without the high-octane mischief. Brice and Sanders, in particular, forge an electric tension at the slower tempos, as evidenced by the sequence of abrupt plucks and clanging resonance in "Metal Taste/Dedicated To Johannes Bauer." But every possible permutation revels in communication at the highest level: Sanders' patterns echo and reinforce Trzaskas's insistent proselytizing later in the same cut, whereas an engaging exchange of alto yelps and bowed swipes stands out on "One For Bad Ola."

This is an impressive offering from an outfit at the top of its game.