By DAVE NATHAN
October 1, 2000
Sign in to view read count 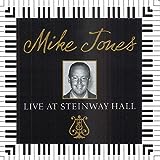 Buffalo native Mike Jones clearly has listened to and learned from them all, Erroll Garner, Willy "The Lion" Smith, Oscar Peterson, Bud Powell, Teddy Wilson, and Art Tatum, especially Art Tatum. The arpeggios and the emphasis on the melody-driven right hand reminds one of the master pianist. Not only is a pianist known by those who influenced him, but also by the songs he plays. On this album, all but one of the tunes are classic entries in the Great American Songbook. The one exception, Oscar Peterson's "Kelly's Blues" doesn't seem out of place at all. "Listened" and "learned" are the operative words, not copied. A worn phrase, perhaps, but Jones is "carrying on the tradition" of these giants of the keyboard, perhaps on the way to becoming one himself.

On this album Mr. Jones playing before a small group, takes on all tempos without fear or trepidation. He swings, he strides, he dazzles with speed and sentimentalizes with romantic playing as he runs through this play list of eleven tunes taking almost 80 minutes to do it. Taking advantage of this generous amount of time made available by Chiaroscuro, each tune gets a thorough vetting. Jones can change tempos in a wink of the eye as he shows on "I'm Through with Love". Making sure that he doesn't fall into that trap of predictability, he takes a tune and completely changes the way one normally hears it played, like a bouncy, close to funky "It Happened in Monterey". On other tracks, while he doesn't sing, you can almost hear the lyrics as on his interpretation of "The Things We Did Last Summer", which features more than one tempo change.

Jones belongs to the old-fashioned school of piano players. No minimalist style for him, he uses the entire keyboard giving the listener full value for his time and money. This album is easy to recommend.