By JAKOB BAEKGAARD
December 24, 2009
Sign in to view read count 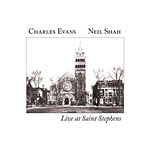 It is sometimes forgotten that music not only exists in time, but also in space. While the unfolding of notes, whether live or recorded, happens over time, the space in which the music is realized is of the outmost importance for the artistic result. The enigma of the improvising artist, the jazz musician in particular, is how to transform music beyond the circumstance of its creation. This is the moment where space is transcended, where the immediacy of the live concert is combined with the perfection of the studio.

There is no doubt that the space of St. Stephens Episcopal Church provided the ideal conditions for the music of saxophonist Charles Evans and pianist Neil Shah. In the liner notes to Live at Saint Stephens, Shah reflects beautifully on the creation of the album, emphasizing "the most holy of venues with perfect acoustics" and the presence of two friends and early influences, David Elliott and Jim Smith, among the audience as possible reasons for the high level of musical expression.

What is most remarkable about the album, though, is the way the two musicians play upon silence and space, not only in the music itself, but also in the room that surrounds it. The acoustics of the church becomes part of an expression where the notes seem to linger into eternity. "In Junie - Part I 'The Father,' Part II 'The Friend,'" the staccato rhythms of Shah's piano is complemented by Evans' saxophone, flying like blackbirds in the sky, only to explode monumentally in a hoarse shriek. There is something immediately human about Evans' tone, a fragility that is adorned in metaphysical garments.

As a pianist, Shah masters the hard abstract dissonance of Cecil Taylor and the deep lyricism of Keith Jarrett, but his style, though at times sparkling, is more sober in its execution. He can play with the lieder-like romanticism of Schubert, as he does in the rendition of Jan Roth's "An Die Fliegenden Fische," but he can also be explicitly modernistic as in Evans' "Mono Monk," with its glassy dissonance.

Evans, whose beautiful compositions create the framework for the music, is decidedly more expressionistic in his approach to his instrument and therefore the perfect companion to Shah's restraint. Evans plays the baritone saxophone with an inventiveness that makes the heavy instrument seem like a flying feather and, yet, he also explores the baritone's immense capacity for the deeper register, with a dark, throaty growl.

Together, Evans and Shah create an intense and intimate dialogue that is able to reach outside the realms of the ordinary. What remains is music of almost otherworldly beauty that both references and transcends the room in which it was played. Not only an artifact, a souvenir of a long forgotten event, Live at St. Stephens is a timeless work of art.

Junie - Part I "The Father," Part II "The Friend"; On Tone Yet - Parts I, II and III; Mono Monk; An Die Fliegenden Fische; Mother and Others; What Worked, What Didn't, What Wouldn't, What Would've.