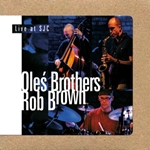 Bartlomiej Brat Oleś (drums) and Marcin Oleś (double bass) have a simple adage when it comes to their music: to remain faithful to their convictions and create music that is open and requires both technical mastery and individual artistry. They have remained true to that whether playing as a Duo (Fenommedia, 2008) or with other musicians like Herb Robertson on Live at Alchemia (Not Two Records, 2007). Interaction and empathy are the twin factors that open the door and capture the imagination as they take off from well composed notations into realms that are both earthy and ethereal.

The tradition continues to find its voice on this CD which was recorded live at the Silesian Jazz Club in Gliwice, Poland with Rob Brown on alto saxophone. Brown has his own history of accomplishments, carrying his unique voice into the Little Huey Orchestra, besides playing with Cecil Taylor, Simon Nabatov and Frank Gratkowski among other celebrated improvisers.

Brown always rises to a challenge and is never afraid to take risks. He runs a wide gamut of expression on the "Here & Now Suite" as he moves from bebop to heated free drive on the highway of invention. Even as he finds that avenue, he parallels the excursion with bop driven lines that find both linearity and stratospheric tangents into which he injects honks, squeals and torques of intensity. The suite opens plenty of room for the rhythm section. Marcin Oleś keeps the beat crisp and ticking, driving the pulse through cross currents of rhythm even as he nails the dynamics and releases tension with supple inflections. The expansive notations of the suite let Bartlomiej Oleś play a lyrical and flowing solo, quite the antithesis of the roiling pulse he lets loose under Brown.

Swing grabs hold of "Black Eagle" and as the trio finds its groove in the mainstream, they bring in a solid structure. Brown at first gives the melody its due before he accelerates time and takes it into inspired runs that burn with intensity. Marcin Oleś is left open for his own outing in an undeniable exhibition of virtuosic iridescence. Bartolmiej Oleś is luminous as he lets each note shine in his distinctive and cogent tone manifested to a high degree on "Ash Tree."

The Oleś brothers and Brown masterfully realize the scope of the compositions through their potent conceptualization of the themes.

About Oles Brothers with Rob Brown