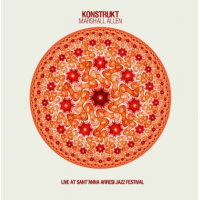 I have seen the future of free jazz (to paraphrase rock critic Jon Landau) and it's name is KonstruKt. Born in Turkey, but cross-fertilized by a global phenomenon of visiting jazz bees: Peter Brötzmann, Joe McPhee, Evan Parker, and Marshall Allen who perform and pollinate the flowering creative music scene.

This outing is also a live date recorded August 2013 in Sardinia. The band opens in quartet on Side 1 (tracks 1-3), before inviting Marshall Allen to perform on the final two tracks. Allen is perhaps the most famous living apostle of Sun Ra and alumni of his Arkestra dating back to the 1950s.

Side 1 finds it's inspiration from Sun Ra, and both tracks mine a cosmic workout that includes the space-time micromoog, whistles, bells, zurna, cura, and various percussion devices. By the time Futaci's saxophone sets sail over the retro-sounds of organ and squiggly Moog the die is cast for interstellar travel. KonstruKt has a method of momentum on this recording that maintains a perpetual energy system.

Their sustainable music has met with Allen before and is documented on Vibrations Of The Day (re:konstruKt, 2012). His presence at the Sant'anna Aressi Jazz Festival increases the energy output. He first tangles saxophone with Futaci, then picks up his electric-valve EVI. The place for KonstruKt and Allen is space and in the tradition of Ra, the music though free is quite tuneful. Usta and Argüden provide a vital pulse and Çaglar's guitar and electronics maintain the astral plane and brilliance.

This disc is released as a very limited edition of 200 LPs, but is also available as a download.