By DAN BILAWSKY
February 14, 2014
Sign in to view read count 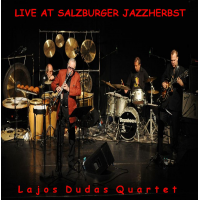 Hungarian clarinetist Lajos Dudas seems to continually find inspiration through altered states of musical companionship. In a three year span, Dudas released four vastly different records that mark him as a bolder-than-the-norm reed man with an unquenchable thirst for something different: He played one-on-one with pianist Hubert Bergmann on What's Up Neighbor (JazzSick, 2011), delivered a wide-ranging, decades-spanning career retrospective in the same year, worked with guitar, bass and drums on Jazz And The City (JazzSick, 2012), and explored trio pathways on Live At Porgy & Bess (JazzSick, 2013). So what does a septuagenarian seeker like Dudas do after he's done all of this? He simply does what he always does; he turns toward the next project, which, in this case, turns out to be a live recording of a percussion-heavy quartet.

Live At Salzburger Jazzherbst finds Dudas, once again, alongside guitarist Philipp Van Endert, a regular and reliable presence on many of his most durable albums. Van Endert always manages to stoke the flames of creation that exist within Dudas' soul, but he's not the news here. The two other men—drummer Kurt Billker and percussionist Jochen Buttner—deserve the lion's share of the ink. They manage to weave together so well, alternately sounding like a single fluid entity or a fully synced-up percussion ensemble.

Heady grooves underscore some of this music, but the percussive elements aren't always based around forward motion. The metallic mists and curious clangs that usher in the album ("Bagpiper") are but one example of the more open-ended creations that come from the bottom end of this band. Elsewhere, the percussionists mirror the mood(s) set down by Dudas, be they ritualistic, bluesy ("At Carmelo's"), playful, and/or exploratory.

The clarinetist balances puckish wit with a dead-serious attitude about his art during this program. He may be strolling along in casual confines for a moment or two ("Urban Blues"), but it's not bound to last. Dudas' curiosity gets the better of him, urging him to continually move forward and onward. That may be the best way to sum up this album and the man who made it.

Bagpiper; Folksong; At Carmelo's; Soft Waves; Urban Blues; Walk In The City; All The Things You Are; Bourree; Mistral; All Of Me.