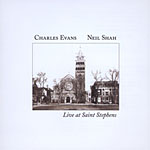 Live At Saint Stephens with baritone saxophonist Charles Evans and pianist Neil Shah— together with the Dan Tepfer/Lee Konitz Duos With Lee (Sunnyside Records, 2009)—is certainly one of the most wildly adventurous records in recent memory. It is not quite entirely spontaneous or improvisational as some of Keith Jarrett's records are. But playing under a magisterial dome of sound—both deep and tender—Evans and Shah create sonic matrices that evolve high and mighty as those once woven by the master of textures in sound, reed man, Jimmy Giuffre together with composed and improvised music that he played with Paul Bley.

It takes enormous responsibility, courage, character and a certain mad dash to create and perform music that is only partially composed, often merely suggested and certainly played from one idea to the next. For Evans and Shah to do so with such seamless magnificence is certainly a pleasure. It is almost as if the two musicians had an otherworldly, fundamental, and almost umbilical connection. This music is often that thoughtful, always riveting. It is also extremely well interpreted as the two men move it along. Evans may know his work more intimately, but Shah deserves equal credit for keeping the soul of this music almost too fragile to listen to—intact and moving along in a logical, spiritual manner.

The songs "Junie" and "On Tone Yet" are short elastic concerti that are probed for their tonal worth. The former is more like a vivid narrative sketch and, with a moving pulse, whirls its way into a heartfelt realm where both musicians uncover what seems to be a rhythmic soul palpitating faintly before fading into oblivion, with almost tangible echoes of loss. The latter piece is more formal, yet becomes an unbridled exploratory track, where Evans drags his baritone into sonic territory rarely ventured into with a horn of such deep gravity. Evans follows with clusters of notes and spectacular harmonic flourishes that take the breath away. Yet, far from being an open-ended proposition, the piece evolves from hidden melody to a far more logical conclusion than expected.

"Mono Monk" is an architectural excursion that is designed to unfold somewhat like Thelonious Monk would have envisioned, perhaps, only it is more linear and less rhythmically eccentric than anything that the master musician might have undertaken. "What Worked, What Didn't, What Wouldn't, What Would've" moves delightfully and serially forward, but certainly this was not imagined. Only with dramatic prodding and stretching the boundaries suggested by the harmonics did it go this far—that much further than the musicians intended.

"An Die Fliegenden Fische" is a beautiful melody that is made to flies in the face of conventional song by both the saxophonist and the pianist, ultimately becoming a circular expedition led Evans and Shah. "Mother and Others" develops into a tender, elegiac piece that takes on a life of its own through deeply felt music and soulful feeling, something that characterizes this fine record throughout.

Junie Part I "The Father," Part II "The Friend"; On Tone Yet--Parts I, II and III; Mono Monk; An Die Fliegenden Fische; Mother and Others; What Worked, What Didn't, What Wouldn't, What Would've.