By GLENN ASTARITA
March 6, 2015
Sign in to view read count 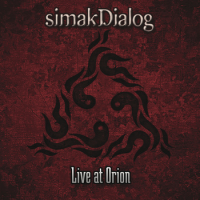 There's a lot to be said for possessing a signature sound and style these days, regardless of genre. But the cunning Indonesian jazz fusion outfit simakDialog have gradually imprinted a deep-rooted mark of authenticity on the global fusion and progressive rock circuits. Recorded during the band's 2013 US tour which concluded at Orion Studios in Baltimore, a distinguishing factor pertains to percussionists Endang Ramdan and Erlan Suwardana's use of the Sundanese kendang drums, which are conventional staples employed in Southeast Asian gamelan ensembles. However, Cucu Kurnia augments the flows with assorted metal percussion implements. Thus, a simmering heartbeat sans a traditional drum-kit prevails.

Tohpati is an emerging guitar hero, based on the output of his work with this band and solo outings, all produced by Moonjune Records. Meanwhile, Riza Arshad masters the Fender Rhodes with aplomb and a truly impassioned mode of expressionism. And from an improvisational standpoint, the musicians afford themselves generous space to stretch out and reformulate the melodies and hooks, often articulated with searching and soaring thematic qualities. Moreover, bassist Rudy Zulkarnaen's pumping notes help interlock the bristling pulses with the frontline during these extended workouts.

This 2-CD set matures rather nicely on repeated listens, primarily due to the tuneful licks and motifs that are understated or subliminally portrayed, becoming more conspicuous over time. For example, on "Throwing Words," the band underscores a harmonically attractive theme with a sense of urgency, featuring Tohpati's infusion of a little grit and grizzle via distortion techniques and budding improv segments with Arshad. And during various passages the percussionists' twirl through bracing unison lines with the soloists, complemented by indigenous folk statements and jazzy breakouts.

Arshad's fluently ascending single notes and percussive block chords serve a dual purpose, where he overlays a bouncy vibe atop the rhythm section and trades fours with Tohpati, while building up steam along the way. And the guitarist goes for the gusto with scathing upper-register licks and rippling flurries on "Stepping In," whereas the band explores hallowed vistas on the stately piece, "For Once and Never." In addition, the album's lengthiest track "This Spirit (18:01)," is engineered with inward-looking subplots and a burgeoning improvisation-based voyage, amped by Tohpati's feedback and volume control manipulations and Arshad's pumping chord clusters. Ultimately, the artists introduce a veritable Jetstream of novel concepts amid a stylishly depicted set of propositions. (Strongly recommended...)

CD1 - Throwing Words; Stepping Inn; For Once And Never; One Has To Be; Lain Parantina. CD2 - This Spirit; Kemarau; Disapih.