By JAKOB BAEKGAARD
January 29, 2010
Sign in to view read count 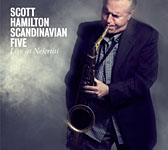 Jazz isn't always about breaking new ground in terms of sound and genre. It's just as important to preserve the music of the masters, and nobody carries the torch of tradition more elegantly than tenor saxophonist Scott Hamilton. His heroes include Ben Webster, Coleman Hawkins and Lester Young—in short, the founding fathers of swing saxophone playing.

Paradoxically, Hamilton was something of a rare bird when he first emerged on the scene back in the seventies because of his emphasis on pre-modern jazz in an age of high-tech fusion. However, Hamilton stuck to his trade and throughout the years, he has steadily released a stream of delightful records on the renowned Concord Records. The release of Live at Nefertiti finds the saxophonist dipping into unknown waters, though not in terms of genre, where he's still swinging as strong as ever, Rather, his new course is in the shape of a new Scandinavian group gathered by Danish drummer Kristian Leth.

The Scandinavian Five features two Swedish aces, pianist Jan Lundgren and guitarist Ulf Wakenius, with Leth and Danish bassist Jesper Bodilsen rounding out the group. They are a stellar team that brings shimmer and depth to the recording whose intimacy is further enhanced by the live setting of the Swedish club Nefertiti.

Denzil Best's "Move" heats things up from the beginning with Hamilton's honking saxophone and a lightning-fast guitar solo from Wakenius, who impresses with his technical skills and melodic invention. But no matter how hard the group is able to swing, Hamilton is, in essence, a ballad-man. This is reflected on the epic renderings of "Dear Old Stockholm" and "Bye Bye Blackbird," which feature the gorgeously romantic harmonizing of Lundgren. Hamilton is not only a storyteller, he is also a listener. In fact, all the musicians in the group listen to each other with great empathy, as can be seen in the DVD that accompanies the CD, an opportunity to experience the full show in sparkling color and sound.

The whole package is hard to beat when it comes to getting an introduction to an important traditionalist who still plays the sounds from the past as fresh as if they were the music of tomorrow.