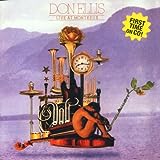 Recorded 27 years ago, this album from the Don Ellis library contains all the rhythmic and polyphonic excitement that you’d expect from such a pioneer in modern big band jazz. With this CD release, the original LP has been augmented by the addition of three previously unreleased tracks that came from the same Montreux performance.

With his trumpet in hand, and an instrumentation that exceeds the norm, Ellis gave the world a remarkable sound. His compositions and arrangements left their mark. Performances such as this one have provided inspiration for all. Bass clarinet, French horn, oboe, tuba, congas and a string quartet combined to give his orchestra a unique collective timbre. Add to that his fascination with meter. “Future Feature,” for example, is in traditional 4/4, but its complex subdivision gives you that old Don Ellis magic: 223, 32, 223, 32, 3232, 223, 223, 3232, 33.

”Lyra,” “Eros,” and “Arcturus” appeared on another album for Atlantic, Music From Other Galaxies And Planets Featuring The Theme From Star Wars, which was created in a studio. Therefore, the inclusion here of live performances of these three pieces at Montreux was never considered. They make a sizable addition to the concert, however, and these arrangements fit in well. “Arcturus” was the concert’s encore.

This was Ellis’ final recording. He passed away the following year at age 44 from complications of an earlier heart attack. His farewell trumpet solo on “Niner Two” leaves a lasting impression.