By JACK BOWERS
September 25, 2004
Sign in to view read count 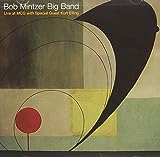 Bob Mintzer leads a superlative big band with seasoned pros in every chair, but what really gives the engine its get-up-and-go are the maestro's invariably admirable charts, unerring road maps that always ensure a smooth and delightful journey. This first-ever live album by the ensemble, recorded in May '02 at the Manchester Craftsmen's Guild in Pittsburgh, PA, is at its best on the half-dozen instrumentals, even though guest vocalist Kurt Elling does what he can to jump-start the other three.

All but one of the selections, Herbie Hancock's turbulent "Eye of the Hurricane," have appeared on earlier albums, but it's no less pleasurable to revisit them in a concert setting. Elling puts his formidable chops to the test on the lingering (twelve-minutes-plus) "Hurricane" with some acrobatic scatting and vocalese, parrying taut statements by Mintzer, trumpeter Scott Wendholt and drummer John Riley. He's more loose and mellow on Victor Young/Ned Washington's hauntingly beautiful love song "My Foolish Heart" (complete with its charming yet seldom-heard introduction) and in front of a quartet on the less-persuasive ballad "All Is Quiet," which he and Mintzer co-authored.

Mintzer arranged "One O'Clock Jump" (for the album Homage to Count Basie ) and wrote everything else—"El Caborojono," "Gently," "Timeless," "Who's Walkin' Who," "Original People." Each of these themes has its own allure, and all are interlaced with weighty remarks by Mintzer's cadre of talented soloists, especially pianist Phil Markowitz (dazzling on "One O'Clock Jump," "Timeless" and "Original People"). Others who have their say are trombonists Michael Davis, Keith O'Quinn and Larry Farrell, trumpeter Michael Philip Mossman, alto saxophonist Pete Yellin, tenor Bob Malach and baritone Roger Rosenberg.

Fans of big bands in general and Mintzer in particular should find much to enjoy on this buoyant and generally likable album, and may even warm to the vocal tracks more readily than yours truly. As a bonus, all proceeds from its sale go directly to support a worthy cause, the MCG Jazz program.

El Caborojono; My Foolish Heart; One O'Clock Jump; Gently; Eye of the Hurricane; Timeless; All Is Quiet; Who's Walkin' Who; Original People (70:45).