By WOODROW WILKINS
December 7, 2007
Sign in to view read count 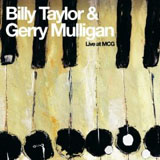 The typical jazz listener easily tires of hearing standards covered by newer artists. However, it's occasionally good to hear the masters revisit some of these old compositions—a way of staying connected. Jazz legends Billy Taylor and Gerry Mulligan have done that with Live at MCG. The Manchester Craftsmen's Guild is a non-profit organization in Pittsburgh, USA whose mission is to preserve, present and promote jazz. In doing so, MCG brings in artists such as Taylor and Mulligan to entertain and educate the jazz public.

Taylor is a pianist, composer, teacher, lecturer, radio and television personality, recording artist and author. His career began in 1944, and he's enjoyed working alongside such musical powerhouses as Charlie Parker, Dizzy Gillespie and Miles Davis. Mulligan, who passed away in 1996, was an arranger, composer, saxophonist and conductor, and has shared the stage or studio with icons including Louis Armstrong, Count Basie, Lester Young, Duke Ellington, Dave Brubeck and Billie Holliday.

Live at MCG captures the pair, backed by Taylor's regular sidemen, during a series of 1993 concerts at the MCG Music Hall. The ensemble performs ten songs, including two originals. Mulligan's baritone sax carries most of the lead on the delightful "Stompin' at the Savoy, though Taylor also licks his chops. Drummer Carl Allen helps underscore "Just You Just Me with some crisp work on the cymbals and snare. Bassist Chip Jackson opens up during Taylor's solo.

One of the original songs is Mulligan's "Line for Lyons. Here, the quartet functions more as a unit than on most other tracks. Mulligan carries the lead, but Taylor, Allen and Jackson also give strong performances. Again, Jackson shows his skills during Taylor's solo, and later delivers a solo of his own. The other original is Taylor's "Capricious, an energetic closer to this collection. As with "Line for Lyons, the foursome is more of a unit than on other tracks. Allen's rim shots and variances on the toms and cymbals help give this an extra kick.

Live at MCG serves a dual purpose: It entertains while providing a subliminal lesson in improvisation, a hallmark of jazz past and present. Having these two masters work together enhances the experience.

Stompin' at the Savoy; Just You Just Me; Darn That Dream; All the Things You Are; Laura; Line for Lyons; Body and Soul; (Back Home Again In) Indiana; Come Sunday; Capricious.