By DAN MCCLENAGHAN
December 10, 2009
Sign in to view read count 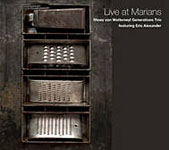 Swiss pianist Stewy von Wattenwyl blasts into this high energy set, Live at Marians, with a blistering one-two punch of Wes Montgomery's "Fried Pies" and John Coltrane's "Moments Notice." The leader pounds the keys in a McCoy Tyner mode, and saxophonist Eric Alexander sounds raw and just barely tamed. This is not a sound that can be called laidback; this is a gale force wind gusting into town.

Von Wattenwyl, a well-versed keyboardist, has a discography that includes a fine trio outing, Dienda (Brambus Records, 2005), a ham-hocks-in-the-collard-greens organ/sax/drums/trumpet affair with Wabash (Bemsha Music, 2005), and a previous outing with Alexander, Live at Bird's Eye (Roving Sirits, 2003). The live setting definitely agrees with the Swiss keyboardist. The music on Live at Marians crackles with spontaneity, and nobody is being careful. These guys came to kick down the doors and play some jazz.

The band slows the pace on the Kahn/Van Heusen standard "All the Way," with von Wattenwyl displaying a tender touch behind Alexander's soulful horn. Tom Harrell's "Terrestris" cranks things back to a mid-tempo on the tightest performance of the night. The pianist opens Bill Evans' "Very Early" with a beautifully inward intro, before the saxophone comes in with a ringing tone.

The power's back on in a down tempo way with Sonny Rollins' "Sonnymoon for Two." Alexander digs deep, like Rollins, and the entire band seems particularly inspired and interactive on this down and dirty take, as Von Wattenwyl crafts a superb solo that takes flight in front of a rubbery rhythm.

Stanley Turrentine's "Stan's Shuffle" features Wattenwyl and the band at their free-swinging best, wrapping things up with a tune that must have had the audience up out of their chairs and dancing.