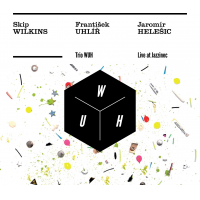 Founded in January, 2012 in Prague after an almost impromptu first gig together as a group, Trio WUH—which, although had been a part of a previous recording from the Prague Castle along with several other groups—present their solo debut album Live at Jazzinec taken from a 2013 live recording in Trutnov, Czech Republic. Spending his time between Pennsylvania and the Czech Republic, American pianist Skip Wilkins and Czech band mates, string bassist Frantisek Uhlir and drummer Jaromir Helesic, were in the middle of a three-week tour when one of their live performances—at Festival Jazzinec—happened to be recorded without their knowledge at the time. The presentation of select standards and new originals in a surprising but fortunate documentation of Trio WUH's live set, captures a compelling performance from arguably, one of the best new dynamic trios in the jazz world today.

The music begins with perhaps the most ambitious piece of the set, an audacious and expansive rendition of the time-honored Jimmy Van Heusen classic "The Second Time Around" featuring a monster performance from Wilkins on the keys as well as sensational solos from Uhlir, who comes from the "Czech String-bass playing school" as well as strong and sturdy drum work by Helesic—in a formula repeated throughout the session. The group plays fast and furious on Uhlir's "Bossa Cosa," the first of the bassist's three originals and then in contrast, slows down the tempo on the balladic Wilkins piece "Quiet, Please!

The trio seems to be on fire performing with gusto on such tunes as "You Are Never at Home," Wilkins' "Take The Fourth" and the devilish but outstanding version of the "Devil May Care" standard—all highlighted by more superb solos from members of the band. As tight and terrific this trio sounds performing lively up beat material, they are just as good when delivering the soft stuff as they do so well on the warm treatment of Antonio Carlos Jobim's "Luiza," Uhlir's last original "Song for Jane," and the Harry Warren finale standard "I'll String Along with You."

There always seem to be a plethora of piano trio recordings to choose from but few, leave a lasting impression and stand out above the rest. Such is the case with Live at Jazzinec and elite recording from the cohesive musical force Trio WUH, three veteran musicians who combine their writing skills and talents as players in making musical statements hard to ignore.

Track Listing: The Second Time Around; Bossa Cosa; Quiet, Please!; You Are Never at Home; Luiza; Take the Fourth; Song for Jane; Devil May Care; I'll String Along with You.