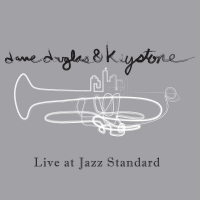 With the success of trumpeter Dave Douglas' twelve virtual CD collection of music from a six-night run at New York's Jazz Standard in December, 2006 with his longstanding Quintet—the download-only versions, representing twelve hours of music, ultimately distilled into the hard two-CD set, Live at the Jazz Standard (Greenleaf, 2007), that brought together all the Quintet's new music—it's no surprise that, when the veteran trumpeter took his Keystone group into the same venue in April, 2008, he'd do the same thing.

Each of the sets (two per night) represented on the virtual eight CDs of Keystone Live at the Jazz Standard were recorded and made available the following morning in downloadable format—both less-expensive MP3 and still very reasonably priced lossless FLAC. The music is culled from both Keystone (Greenleaf, 2005), Moonshine (Greenleaf, 2007) in its entirety (with only Keystone's "Just Another Murder" conspicuously missing), in addition to including four tunes from his initial, pre-Keystone foray into the world of electronics and post-production editing and sound collage, Freak In (RCA, 2003), and six brand new tracks plus "Pool Sharks," which will be new to those who've not heard Greenleaf's mail order-only Paperback Series release, Keystone Live in Sweden (Greenleaf,2006). It's as comprehensive a look at the Keystone songbook as Live at the Jazz Standard was the definitive consolidation of the Quintet's repertoire.

With the same line-up as on Moonshine and Keystone Live in Sweden, the stability of this group, now over two years old, means that by the time they set foot in the Jazz Standard, they were so comfortable with Douglas' music that there was nothing to do but relax and dive in. The electronica-informed nature of Keystone, specifically DJ Olive's turntables and laptop adding a wealth of ideas and textures to the group, differentiates itself considerably from instrumentation otherwise the same as Douglas' Quintet—trumpet, saxophone, Fender Rhodes, bass and drums. The instrumentation may be close, but the writing is completely different (despite sounding unmistakably like Douglas), with a greater emphasis on groove and atmosphere.

Keystone is, indeed, a blowing band, but its studio recordings (even Moonshine, which was recorded live in the studio to capture the group's spontaneity) also benefit from post-production digital editing to help shape the sound of the material. Live, there's no possibility for massaging the music after the fact, but the core of Keystone has always been a playing band, where electronics are a seamlessly integrated part of a freer approach that make four versions of the knotty-themed but ultimately funky "Tough," ranging from twelve to seventeen minutes, stand on their own as very different takes of the same tune.

The April 10th early show version of "Tough" begins in total abstraction, the catchy groove not emerging until nearly a minute in, with its idiosyncratic theme showing up well past the two-minute mark. The version that closes the April 11th late show, on the other hand, finds drummer Gene Lake's booty-shaking beat fading in almost immediately and more directly, with vocal, orchestral and percussion samples gradually but relentlessly taking their time to lead to both the familiar groove three minutes in and the frontline horns delivering the melody at the five-minute mark. The rhythm section bubbling under Douglas' solo on the April 10th early show is far more direct on April 11th. Still, when saxophonist Marcus Strickland kicks in for his solo on the April 11th take, Lake, DJ Olive and bassist Brad Jones lay down a more intense foundation, pushing him to greater extremes.

The four versions of "Tough" all occupy the same place—the set closer, making it clear that this was a good early choice for the group. Three versions of "Moonshine" occupy first place in two sets (April 12th late show and April 13th early show), or second place (April 10th early show). Like "Tough," they rely on a visceral rhythm, though how they get there is different each time, the early version heading straight for the pulse, while later versions taking more time to get there. That Lake and DJ Olive find different ways to arrive at the same point demonstrates the improvisational and musical validity of turntables and laptop sampling and sound sourcing. DJ Olive may not play a conventional instrument, but musically he's every bit as important as the members of Keystone who do, and contributes to the improvisational nature of the group, making any track heard more than once in the collection a similar but different experience.

Douglas' songs may not follow conventional structure—head, solo, head—but they are similarly sketch-like, leaving plenty of room for the group to stretch out collectively and individually. Electric pianist Adam Benjamin and Strickland solo with consistent invention and excitement on the up-tempo tunes, like the metal-meets-funk of "Pool Sharks," where Benjamin's Fender Rhodes is heavily overdriven, and the fiery "Kitten," where solos are traded between everyone but culminate in collective spontaneity that's as close to chaos as Keystone gets. But the group is equally capable of ethereal textures and soundsculpting on tone poems like "Porto Alegre," which harkens back to Weather Report's early abstract, pre-groove days.

Throughout, Douglas' playing and writing is a focal point that, despite their differences in approach, links Keystone and his Quintet. The approach of the writing may be different, and the musical personalities of the players disparate as well, but despite the electronic complexion of Keystone, there are plenty of unifiers that make both groups two sides of the same coin. Most dominant is that they are both performing bands, where the writing is key, but still only a general roadmap for extemporaneous exploration. As more and more groups find ways to incorporate contemporary technology with conventional instrumentation, so, too, are the possibilities endless. Listening to artists like DJ Olive and Norway's DJ Strangefruit, whose Beauty Came to Us in Stone (Jazzland, 2006) was such a revelation, can there be any doubt that turntablists/samplers are, indeed, musicians as valid as any playing more orthodox instruments?

It may be a curiosity when people collect multiple shows by groups for whom each performance is effectively the same. Keystone Live at the Jazz Standard, on the other hand, is not only a great consolidation of the group's repertoire to date but, with plenty of room for everyone's voice to ring through loud and clear, represents eight hours of some of the most exciting and sonically rich live music the Jazz Standard has ever hosted.