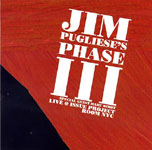 In the tradition of raucously creative Downtown NYC jazz-rock bands like Curlew and Naked City, Jim Pugliese's Phase III burns with passion that is both musical and conceptually bold and is a great working band, not just a thrown-together collection of accomplished soloists. Yet these are not mere AABA compositions nor are they played to display a pristine sense of melody: they thrash and kick about like kids having fun in a playground, yet with an adult's deep connection and knowledge of music. This is not surprising as Pugliese has performed with traditional classical ensembles as well as with contemporary composers like John Cage and Philip Glass.

Perhaps even more pertinent to the Phase III project, Pugliese has intensely studied African music tradition. "Kundo" is, in fact, from the repertoire of Nii Tettey Tetteh, the Ghanaian master musician that Pugliese cites as a mentor and major influence. All the instruments—sax (Michael Attias), guitar (Marco Cappelli), bass (Kato Hideki) and drums (Christine Bard as well as Pugliese)—interlock and flow, revealing layers of music that erase concepts like background and foreground or primary and secondary melodies.

"Fresh," an original by the leader, also displays the ensemble synergy that starts with an angular unison line and develops into a funky groove over which Cappelli wails. The groove drops out while the intense dialogue continues, the mind-blowing, cathartic lines of sax and over-driven electric guitar melding together in a way that blur the difference between them. Then, pow, the rhythm section re-enters, changing the texture from a rolling boil to an ominous simmer. But not for long. The screaming sax-guitar rejoins to make this twisted sonic car ride go until the last unison line puts on the breaks, leaving only the smell of burning rubber.

"Slipped" and "New Cued," also the leader's originals, might display more of the Cage influence with contrasting sections (sometimes only lasting seconds) of very loud fusillades of notes, then silence, then atmospheric drones, then an ending on a power chord. It's all here. Hypnotic grooves, noise, stop-on-a-dime unison lines, blistering free jazz and then one of the most tender and sincere moments the Downtown scene has ever offered. "Kariga Mombe" is performed by Pugliese alone, singing and playing the mbira (African thumb piano), and it not only serves as a touching last track to this amazing CD but also as beautiful tribute to the leader's father, who passed away only days before this concert was recorded.