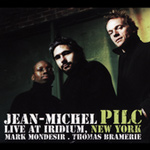 If you have heard Jean-Michel Pilc live or on record, you will know that Live At Iridium, New York may bring goosebumps. Together, the tracks represent an excellent splicing job of tunes from sets over three nights in October 2004 to make up what sounds like one set. The record will almost certainly make you say, "Man, I wish I had been there!

The energy of the trio is amazing and so is the stamina on display, but ultimately the most impressive thing is the strong individual and group musicianship. Immediately from the outset of Pilc's "No Print, the band starts off in high gear with an irregular-length, Latinish bass ostinato, chord clusters, and light but busy drumming. There is no letup for over ten minutes as the motive is introduced and then taken apart. Pilc is never—ever— predictable, moving from dissonant outbursts to lush chords to fast runs effortlessly. He can be quite free rhythmically as well, yet manages to stay in touch with his rhythm section of Thomas Bramerie (bass) and Mark Mondesir (drums), who lock in as one player. The ten minutes fly by, having been based on essentially a chord progression shaped by a rhythm pattern, ending in a drum eruption from Mondesir that gets higher and impossibly higher until the band moves directly into first of four Monk tunes (tracks two to five, "Jackie-Ing, Pt. 1," "Misterioso," "Green Chimneys," and "Jackie-Ing, Pt. 2 ).

When this happens, and the surprise wears off, the in-joke becomes clear in that "No Print" (despite being Pilc's "oblique variation of Wayne Shorter's 'Footprints'") appears to be the essence of Monk channeled through Pilc and company in that it has the same angular humor, and the same inevitability of the complex derived from the simple, which marks all true art. Pilc "gets" Monk and manages to convey the kernel of each tune without sounding very much like Monk at all, but in a way that Monk's ghost could have been dancing on the stage. Together the Monk pieces take about eleven minutes. Each is recognizable but extremely reshaped without losing touch of its Monkishness.

The other main piece is Coltrane's "Spiritual," in which Pilc manages to suspend time while once again getting to the essence of Trane's mystical quest to connect to the absolute's majesty and terror.

It is a true joy to hear such a strong musical personality continually take chances such that you can ever tell what is going to happen the next second, much less the next tune. Pilc says volumes while almost never playing what might be considered a "melodic line." We can hear him thinking, grabbing an idea, twisting it and presenting it anew, only to move on in the next moment. Light years away from someone like Bobo Stenson in the emotional climate he creates, he nevertheless produces that same holding-of-one's-breath feeling which happens when there is no space between performer and audience.

Highly recommended. We should be glad this former rocket scientist decided to embrace his true love, jazz.