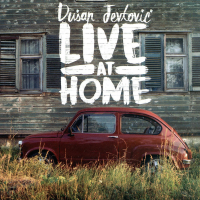 Prominent Serbian guitarist Dusan Jevtovic and his fellow countrymen recorded this synergistic set at a venue in Kragujevac, Serbia. It's a limited-edition CD release, but available as a digital download and via streaming mechanisms. Nonetheless, it's an album where the musicians seemingly play the right notes, sans any extraneous dabbling, tinkering or excessive soloing jaunts. Even the improvisational segments are devised on purposeful storylines that often encircle a given theme, largely set upon progressive rock and distinguished keyboardist Vasil Hadzimanov's harmonious voicings and jazzy hooks.

They kick matters into gear on "No Answer," as Jevtovic's nimble intro and low-key volume control effects transcend into a hard-nosed piece awash with stinging lines and full-blown aerial assaults amid some nip and tuck like exchanges with the keyboardist. However, the quartet usually alternates the pitch and intensity level with temperate interludes and melodic theme-building exercises.

On "Ohrid," Hadzimanov crafts a memorable and wistful motif that kindles memories of 1970s British Canterbury progressive rock. Here, the frontline improvises off the primary theme with zesty choruses and simmering buildups, along with numerous contrasts and contrapuntal maneuvers, prodded by drummer Pedja Milutinovic's peppery support and bassist Pera Krstajic's limber bottom-end. Moreover, the band ventures toward a climactic finale while incorporating an abundance of textural shadings into the mix.

Jevtovic stretches out on the straight-ahead rocker "New Pop," anchored by the keyboardist's feathery jazz-based single note runs, and followed by the bassist's tuneful solo. Yet "Babe," imports early Mahavishnu Orchestra attributes, boasting a cyclical groove and the leader's searing fuzz-toned lines. They even fuse a sampled world music vocal part into the festivities. Indeed, there's no place like home, as the band's discernable comfort level is at the forefront on this engaging set that projects an upbeat vibe.