By MARC MEDWIN
September 18, 2008
Sign in to view read count 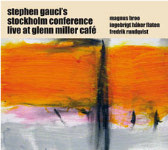 New York tenor saxophonist Stephen Gauci's first trip to Stockholm is documented on these hard-hitting Ayler releases in a double-disc set and an mp3 download. Between the two releases, most of the music recorded by this newly formed aggregate on Jul. 9th-10th, 2007 at the Glenn Miller Café is captured in vivid if slightly constricted sound.

Gauci's work is always fascinating. Like Jimmy Lyons, his roots in bebop rhetoric are always evident, accompanied by an evenness of tone and execution throughout the registers; the way he shapes each note and gesture sets him apart from whatever tradition he's absorbed. He pushes and pulls each phrase of "Talk," to cite only one example, shifting dynamics with subtlety and grace but with a jabbing straight tone and constantly varied decay that speak to a New Thing aesthetic.

The group dynamic throughout is even more interesting. Free jazz is obviously in evidence, but the group often seems divided into two separately working units, each a tight and well-oiled entity in and of itself. Bassist Ingebrigt Håker Flaten and drummer Fredrik Rundqvist engage in stunning long-term tempo shifts, gradually speeding up or slowing down with hairpin precision as Gauci and trombonist Mats Äleklint or trumpeter Magnus Broo emote overtop. Meanwhile, Gauci and the brass players glide and circle around each other in intricate counterpoint, Broo sounding like a reincarnation of the much lamented Mongezi Feza. On the epic version of "Sonnymoon for Two" that opens the download, Broo complements the melody with sly dissonances and subtle swells that nevertheless exude cool.

The band very rarely heats up to boiling point, a happy occurrence as the recording distorts at the top edges. However, there is a sense of immediacy about the whole thing, enhanced by wails and moans from Håker Flaten that conjure shades of 1964 Albert Ayler club dates. The audience is involved and enthusiastic and this is another fine achievement from this consistently satisfying label.

CD1: No Color Of Its Own; Talk Whatever Comes; All I Do Is Lie Back; Suck My Thumb; Sonnymoon For Two. CD2: Not Two Not One Either; So Many Words About It; For You; Happy With Stone Underhead; Empty Handed. CD3: Sonnymoon for Two; No One Knows Which is Which.