By DAN BILAWSKY
September 25, 2012
Sign in to view read count 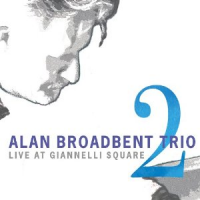 Promise of more to come came with the numerical tag at the end of pianist Alan Broadbent's superb Live At Giannelli Square: Vol. 1 (Chilly Bin, 2010); two years later, he's made good on that promise. Live At Giannelli Square: Vol. 2, recorded as its predecessor was just seeing release, finds Broadbent and his brilliantly understated trio mates back at the same San Fernando Valley venue, making magic in their own sweet way.

The class, charm and musical savoir-faire that were ever-present on the first album, and virtually every recording Broadbent has made under his name in recent years, are evident throughout this sequel. While this record is a logical extension of Live At Giannelli Square: Vol. 1 in tone, tact and musical temperament, it stands apart because it highlights Broadbent's own written work. Much attention is often given to his arranging and skills as a standards-playing encyclopedia, but his own compositions rarely receive their due. Broadbent forces the issue here, tipping the programming scales in favor of his own pieces and it's a wise decision. The sly and gently swinging "Blues In 'n' Out" is finger-snapping good, Broadbent brilliantly plays off of bassist Putter Smith on "Wandering Road," and he moves from romantic and rhapsodic notions to late night musings on "Sing A Song Of Dameron." Tempos remain mild for most of the set, but the final, album-ending original, "Three For All," has some spring in its step, which helps to fire the imagination and musical muscles of all involved.

While Broadbent turns his attention to his own tunes, he doesn't turn his back on the jazz canon. His fingers probe the lower recesses of the piano as "You Don't Know What Love Is" gets underway and he makes the instrument twinkle in the aural light as reaches its final resting place. George Shearing's oft-ignored "Conception" also proves to be an inspired choice, but it's the album-opening essay on "Yesterdays" that comes off as the strongest number on the date. Broadbent shifts effortlessly from inside, down the middle soloing to quirky, outside sidebars as he demonstrates some incredible, Roger Kellaway-like independence. Smith and drummer Kendall Kay move from snazzy understatement to deep groove-making here and Kay delivers a simple, yet not-so-simple solo that creates a "hear a pin drop" moment.

So many trios operating today try to make their mark by swimming against the current or turning performances into athletic displays, but that's not the Broadbent way. These three men make the point that no-fuss music, made by exceptionally knowledgeable and skilled craftsmen, will always rise to the top.

Yesterdays; You Don't Know What Love Is; Blues In 'n' Out; Wandering Road; Conception; Sing A Song Of Dameron; Three For All.