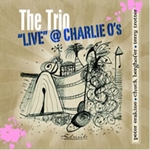 Three Los Angeles session men with a massive collective résumé as sidemen but, with the exception of one—drummer Peter Erskine—diminutive discographies as leaders; one set of largely iconic standards; and one live set from a club where the players, called simply "The Trio," perform on a regular basis. Live at Charlie O's is a loving tribute to two men: Charlie Ottaviano the club's founder, who sadly passed away in 2008, at the age of 66; and Edmond Demirdjian, a Bulgarian artist who also passed away too young the following year at 58, and whose artwork has, amongst many other things graced a number of releases on Erskine's Fuzzy Music label, including this one-hour set, recorded at Charlie O's at the beginning of 2009.

Opening this relaxed set with an ambling version of Larry Spier's "Put Your Little Foot Right Out," Erskine and bassist Chuck Berghofer swing with the kind of relaxed physicality that only comes from years of familiarity. Since a significant paradigm shift in 1992, while recording guitarist John Abercrombie's November (ECM, 1993) and You Never Know (ECM, 1993)—the first of four outstanding trio recordings under his own name, with pianist John Taylor and bassist Palle Danielsson—Erskine has become increasingly connected to the egoless demands of the music, rather than the self-interest of playing it. Still in possession of the ample chops he demonstrated as a member of fusion super group Weather Report in the 1970s and bassist Marc Johnson's Bass Desires in the 1980s, here Erskine is as graceful as they come, shifting dynamics and building support during pianist Terry Trotter's elegant and economical solo by doing nothing more than moving to a sizzle cymbal...but with playing this understated, it's plenty powerful.

Erskine's subtlety is matched by his band mates. Irving Berlin's enduring "How Deep is the Ocean?" opens with Trotter playing nothing but the lyrical, memorable melody with his right hand. Even when he moves into solo territory, the pianist limits his use of harmony until a couple minutes in, introducing it gradually to build the solo with focused inevitability, even as Erskine, once again, moves from brushes to sticks and Berghofer remains a deeply resonant, unshakable anchor before taking a solo of equal melodic invention.

The trio does pick it up elsewhere in the set, though it's still more about simmering with refined suggestion than coming to a fervent boil. John Lewis' "Afternoon in Paris" is as fiery as the trio gets, in a ballad-heavy set that, in the case of Billy Strayhorn's "Blood Count," leans towards brooding romanticism.

Not destined—or intended—to rattle any cages, this is, instead, an album of relaxed honesty, played with unassuming commitment by a trio that, having accomplished so much in its collective career, has absolutely nothing left to prove. A lesson, instead, in listening and understatement, Live at Charlie O's is as meaningful for what it isn't as what it is; proof that what isn't played can be as determined and intentional an act as what is.