By MARTIN GLADU
December 18, 2008
Sign in to view read count 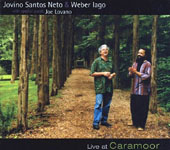 This music pushes. As if moved by an influx of charged energy, it pushes further and further. Where to? Hard to say. Further. Away.

Like those ancient tales of Attila rampaging through the Steps of Asia and burning every strand of grass behind him, Carioca pianists Jovino Santos Neto and Weber Iago jump out of the gates steering wild horses, consumed by an uncontrollable fire that ignites a rushed, almost frantic crusade. What has gotten into them? What fuels this incandescent fire?

Well, as the ambassadors of a polarized culture and society, today's young Brazilian musicians and composers have much to deal with, to say the least. With a rich musical heritage that is nourished by its Iberian, African and indigenous, Indian musical roots, as well as by the far-reaching influence of giants like Tom Jobim, Luiz Bonfa, Gilberto Gil, Milton Nascimentos and Heitor Villa-Lobos, the wealth of materials available for both study and inspiration prove as bountiful as the country's luxurious flora.

Resolute in showing the American audience they not only master these traditions but can stretch their intrinsic technical demands, Santos Neto and Iago crack some fireworks on Live at Caramoor, a midsummer evening concert taped at the 2007 Caramoor Jazz Festival. A hot date indeed, the energetic duo—which welcomes a cooler guest in saxophonist Joe Lovano on the closing track—burns through a set packed with nervous, fiery playing.

On "Balaio" for example, the buoyant Santos Neto fights against the brisk tempo he sets, causing him to pinch and rush some of his phrases. Ditto for his second solo spot, "Lamentos"—which paradoxically has no pathos whatsoever—as he is found hustling and bustling through the series of snappy syncopations and snarling lines.

Iago, for his part, opts for two contrasting pieces. "Navegante," a Romantic era-like composition with a singing melody and wall of trills, opens the record with a delicately voiced, rubato construction, followed by Dietz and Schwartz's "Alone Together" which, as if inspired by its title, he breaks up rhythmically in a cubist-like manner, and texturally between his line-playing left hand and yapping right.

The pair convenes on Iago's "Choro pra Nos," a playful and cheerful piece in which the two pianos enter in symbiosis to make only one, as well as on "Wave" where they are joined by Lovano. The latter starts off with Lovano's soprano fooling around the contour of Jobim's melody, and segues into his solo, during which he appears phased out by the pair's off-putting comping.