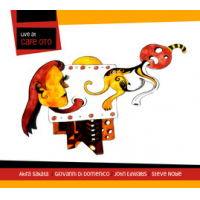 Recorded in concert at London's Cafe Oto in January 2014, this album features the kind of cosmopolitan ensemble in which the venue specialises. It brings together veteran Japanese reedsman Akira Sataka and Spanish pianist Giovanni Di Domenico with London's own John Edwards and Steve Noble. The latter pair have virtually become the house bassist and drummer at Cafe Oto, appearing with many visiting musicians, some of whom play at the venue for that very reason. It is no exaggeration to say that the twosome deserves the often-heard description of them, "the Sly and Robbie of Improv." As well as their permanent places in trios with saxophonist Alan Wilkinson, with Alex Ward on guitar in NEW, and with Alexander Hawkins on Hammond organ in Decoy, they have also played at Oto with notables including Peter Brötzmann and Joe McPhee. Their presence in a group of any size is practically a guarantee that the resulting music will be rhythmic, energy-charged and exciting.

And this album is the latest evidence in support of that statement; across its forty minutes, it crackles and fizzes with energy so that there is never a flat spot or dull moment to be heard. That is not solely down to the bassist and drummer but also to Sataka and Di Domenico too, who both proved themselves equal to their bandmates. Sataka himself belied his age, giving a bravura performance in which he pulled out all the stops, augmenting his rapid-fire saxophone and clarinet playing with interludes of percussion and some demonic vocalising. For his part, the pianist was equally energised, underpinning proceedings with a constant accompaniment of fractured chords that—as with Edwards and Noble—were a perfect complement to Sataka without stealing his thunder. The end result was a quartet in which the component parts were in balance and fitted each other just right, so they sounded as if they have been together for years. Magic... or alchemy.

Since this CD was released, things have gone worryingly quiet at Clamshell Records—for instance, their website seems to have shut down. If that signals that the end of the label is nigh, it is sad as Clamshell have maintained an impressively high standard with their varied output. However, if this were to be their last release, they have gone out on a terrific high. Keep your fingers crossed that we hear more from Clamshell... and from this quartet, too.