By KARL ACKERMANN
August 26, 2018
Sign in to view read count 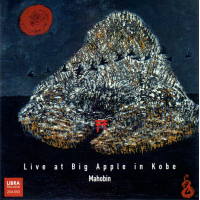 Another new formation marks the eighth entry in the sixtieth-birthday series of monthly releases from Satoko Fujii. As part of the pianist's year long celebration, she has released albums as a solo performer, a duo (with Joe Fonda), a new trio configuration with Fonda and Italian saxophonist Gianni Mimmo and another with Tamura and drummer Takashi Itani. Add in her Kira Kira quartet and Orchestra Berlin and you get a sense of the multiplicity of creative avenues that Fujii explores. The Live at Big Apple in Kobe quartet features Tamura, Denmark native Lotte Anker on saxophone and percussionist/electronic artist Ikue Mori.

Anker initially studied classical piano, moving on to the saxophone and improvised music early on in her musical career. Among those who tutored Anker on sax were Joe Henderson, David Liebman, John Tchicai and David Murray. She has led her own groups since the late 1980s and worked in projects with Nils Petter Molvaer, Tim Berne, Django Bates, Peter Brötzmann, Michael Formanek, Arve Henriksen and many others. Her later trio included Craig Taborn and Gerald Cleaver. Mori moved from her native Japan to New York in the 1970s, becoming a fixture in the city's punk rock scene. As her affinity for experimental music grew, she transitioned from the traditional drum kit to drum machines, sometimes modified to accommodate sampling. Using the laptop computer as an instrument was a later-stage development in her career. She has collaborated with Fred Frith, Dave Douglas, Butch Morris, Marc Ribot, Evan Parker, Bill Laswell, Sylvie Courvoisier, Susie Ibarra and many others over the course of her long career. Mori recorded with Anker on Alien Huddle (Intakt Records, 2008), and with Fujii and Tamura on Aspiration (Libra Records, 2017), an album that also featured Wadada Leo Smith.

Mori's laptop ushers in "Rainbow Elephant"; an embryonic electronic whisper on the verge of turning into a threatening creature via Tamura's extended trumpet technique. We are well in to double-digit time before Fujii's piano adds a more natural voice to the piece but that is only briefly as she soon blends with warped sonic effects, beeps and blips. The intensity builds only to have Fujii pull the rug out from under the proceedings, sharply diverting to yet another route. Anker steps in with a solo that is oddly soulful and abstract at the same time. About a half-hour in Fujii performs the kind of transition that she has mastered, taking the near shambolic nature of the music—almost imperceptibly—to a quiet place. And though the quartet remains in this reflective pattern for the next fifteen minutes, the air is still buzzing with often unidentified activity. Much of "Yellow Sky" is dominated by electronics though it eventually gives way to an explosion of noise from the collective. But Fujii is relentless only in her constant state of flux. Here too, she redirects the shattered air waves, landing them in the equivalent of an aural rain forest.

Live at Big Apple in Kobe marks a return to the more openly free jazz improvisations that Fujii has liberally included in the year-long collection. Mori's electronics do much to cultivate a sense of the unfamiliar here, and contribute to Fujii's uncanny ability to generate album after album with the same sense of adventurousness but no conceptual repetitions. A challenging outing to be sure, but—as all things Fujii—intensely focused and interesting.