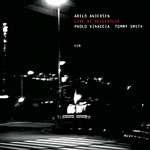 More than forty years ago, Norwegian bassist, Arild Andersen joined saxophonist Jan Garbarek and the late Finnish drummer Edward Vesala to record the groundbreaking Triptykon (ECM 1972), one of these musicians' most energized work. It's a happy coincidence that the new millennium has seen both Garbarek and Andersen—ECM artists, both—create what may be their individual masterpieces—Live at Belleville, in the bassist's case. Andersen's intervening ECM years have generated an impressive catalog of high quality work including Molde Concert (1982), Sagn (1991) and Hyperborean (1997), but these have been more introspective efforts. As much as Live at Belleville is an accomplishment for Andersen, it is no less an achievement for Scottish saxophonist, Tommy Smith. Smith, who has worked with Gary Burton, Joe Lovano, Chick Corea and John Scofield, to name just a few, plays here as though he was born into the setting.

Recorded at Oslo's Belleville Club, this date is centered by the four-part "Independency Suite," Andersen's composition celebrating the independence of his native country. Musical accolades to patriotism, jingoism and many other ism's, tend to lean toward ambiguous pomp, full of sentimentality and short on melodic hooks. Even Charlie Haden's open minded Liberation Music Orchestra treated "America the Beautiful" with a kind of off-kilter reverence. Whatever might be expected in a sovereignty-based theme, Andersen's suite dashes traditional expectations with its free-form improvisation and sense of exploration.

The four parts, totaling more than forty-three minutes, are played without audience interruption, creating an epic scope. "Independency Part 1" plays at a slow, but eccentric tempo, continuing into the opening of "Part 2," where the pace picks up considerably and a freer improvisation begins. Andersen's solos are deep, woody and intricate. Smith demonstrates his ability to produce heat without giving up the melody. "Part 3" is a memorably striking piece, with Smith's long fluid lines and Andersen's sonorous bass creating a pensive atmosphere and stunning harmonies. The concluding section of the suite finds Andersen delivering a bluesy line that changes tempo and expands to accommodate some excellent free flowing improvisational solos from both the bassist and Smith.

The remainder of Live at Belleville includes one standard—a minimalist treatment of "Prelude to a Kiss," where drummer Jim Plank enjoys the opportunity for an extended solo. The closing "Dreamhorse" is an evocative tune, with Andersen taking a technically involved but melodically subtle lead, backed by Vinaccia's understated brushwork. The sound is reminiscent of fellow ECM stable-mate Eberhard Weber's smaller group settings. Smith shines here as he does throughout the collection. His is a brilliant star-turn that almost steals the show. Despite a considerable catalog, Smith is among the under-recognized talents on the US jazz scene. Hopefully, Live at Belleville will correct that oversight.