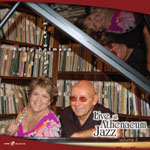 San Diego isn't known as a jazz town in the same way New York or Chicago are, but this city in the southwest corner of the country has its fair share of fine venues for the music, and boasts some first rate artists as well.

One of the best places to hear San Diego jazz is the Athenaeum Music and Arts Library's Music Room, an intimate setting with no audience member more than twenty feet from the performers. On August 2006, two of San Diego's finest jazz musicians, flutist Holly Hofmann and pianist Mike Wofford, presented a duo performance resulting in Live at Athenaeum Jazz, Volume 2.

The duo setting has a spaciousness about it, an intimacy. Wofford is a facile and versatile instrumentalist. The duo takes on Monk with "Introspection/Eronel," two tunes from Thelonious that aren't often heard; Pete Malinverni's twelve bar blues, "Twelve," Harold Arlen's "Out of This World," the Hofmann-penned and tango-ish "Presentimiento," and a Wofford composition, "Floof," taken from Hofmann's flub on the word flute during a recording session.

Hofmann plays alto flute on three numbers, adding its beautiful rich tone to her repertoire, sounding particularly gorgeous on the classic "If I Should Lose You."