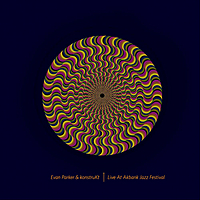 The Akbank Jazz Festival, which is held annually across several venues in Istanbul, Turkey, gives local acts the opportunity to play with international musicians. The venue lures some big names, with the Sun Ra Arkestra, John Surman, the Count Basie Orchestra and Evan Parker among those who have performed in the past. konstruKt performed with Peter Brötzmann in 2008 and with Bik, Bent and Braam the following year. They wanted to play with Parker. who agreed to their request. and joined them in what turned out to be a rousing encounter, documented on Live at Akbank Jazz Festivalc.

The first two pieces are spellbinding solo improvisations from Parker, whose technique has transformed the use of soprano saxophone in free jazz. His creativity brooks no obstacles and his vision has led him across untested terrain. Once abrasive, he has honed the edges without sacrificing his art. Parker marks his presence with the stunning force of his ingenious power as he comes in with a quick exclamation, looping his notes and charging the atmosphere. The pitch is in constant motion, with tonality shifting and seamless motifs braiding the textures. The second piece is more open, with quick, short bursts giving way to melody and space. The intensity is toned down to offer another facet, and while he also uses loops here, he does so less often. In tandem, the tracks underscore Parker's intuitive perspicacity and transformative presence.

The steamy excursions from Parker and Korhan Futacı's soprano saxophones make for a wild ride. Both roil and churn, without going into over drive or trying to get a cut above the other—the foresight to forge a bond overrides predictability and makes for potent complexity. And while there is glory in their power, the whole rises from the input of the others. The colors of percussionist Ozün Usta and drummer Korhan Argüden energize the rhythm, while guitarist Umut Çaglar plays it cool by slipping notes into thin crevices that underlie the horns.

The second group improvisation is more vibrant. The asymmetrical lines of the saxophones, their interweaving conversations, and the sudden shifts into melody are wondrous streams of invention. That pulsating thrust is enlivened by the heady patterns of the rhythm section, with the guitar counterpointing the multilayered drive with gently shaded chords.

konstruKt has had three impressive CDs in a row. Here's looking forward to more.