By JIM SANTELLA
November 13, 2003
Sign in to view read count 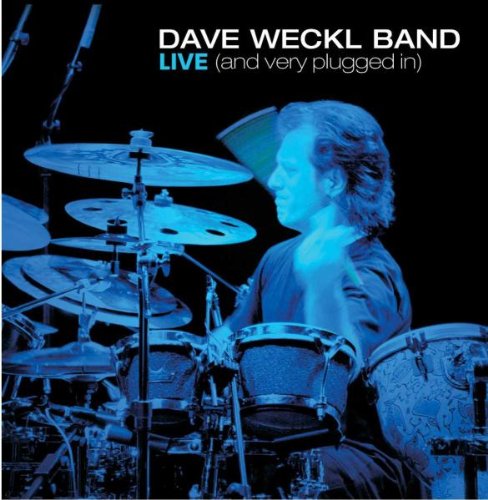 Dave Weckl makes contemporary jazz sizzle with the heat and intensity of artists who’ve grown up with caffeine in their veins and restless anticipation on their minds. The combination of a rumbling electric bass, a gyrating set of keyboards, and a powerfully propulsive set of drums comes naturally to our generation. We’ve been shaking to their textures since before we were even tall enough to ride the beginner roller coaster at our local carnival.

Weckl combines smooth ballads and hectic, turn ‘em loose joyrides on this 2-CD session that was recorded late last year at Catalina Bar and Grill in Hollywood. Gary Meek, Steve Weingart and Tom Kennedy complement the perky drummer with syncopated foundations and ripe harmonies. Melody takes a back seat as keyboards and saxophone weave in and out with spontaneous actions. Weckl bridges their efforts seamlessly to keep his session flowing from the opening number to the closing bar. Interpreting originals for the most part, the band sizzles with action-filled motions.

The high points of this session arrive through compositions that were not contributed by Weckl or his sidemen. “Hesitation,” by Wynton Marsalis, employs a lyrical drum set and a personable tenor saxophone in free-form conversation. The brief number allows the leader and his saxophonist to demonstrate their ease of expression and introduces a rollicking New Orleans shuffle on “The Chicken.” This Pee Wee Ellis composition runs for ten and a half minutes and allows sufficient time for all to contribute their heartfelt visions of jazz’s creative spirit. Quotes from Ellington and New Orleans street shuffles dig deep at what the audience wants to experience.

Weckl, 43, hails from St. Louis. He and Tom Kennedy grew up together and established a musical relationship early on. Weckl’s early years with the drum set were so productive that he started working professionally at age sixteen. After studying music at the University of Bridgeport in Connecticut, Weckl paid his dues (and gained valuable experience) while working with Michel Camilo, Simon & Garfunkel, and Chick Corea.

Kennedy is featured in several spots. His interpretation of “Rhythm-A-Ning” carries with it the piece’s original purpose and stands out alone as another significant high point of the session. The audience must have been deep into his work that night; Kennedy takes your breath away several times. The interpretation comes from bass and drums alone, and stands out as a memorable period piece, timeless both in its appearance and substance.

The addition of more horn players for the final number makes it a bigger production number and rallies the troops toward a broader scope. Weckl and his quartet go out with the same hyperactivity that they came in with. The audience at L.A.’s best-known jazz club was impressed. Quite naturally, so are we.