By CHRISTOPHER HOARD
April 1, 1998
Sign in to view read count 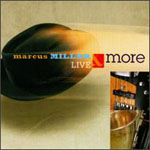 There's no doubting Marcus Miller's "behind-the-scenes" role as the leading stylist in the commercial, contemporary jazz of the 80s and 90s. Behind his influential presence as both a bassist and producer trails an impressive resume of studio works, often perfected to a fault. Marcus Miller is the definition of success during the past decade of contemporary jazz. Miller's unique stamp and collaborations on the past decade's recordings by legends and stars range from Miles Davis, Wayne Shorter, The Crusaders, Aretha Franklin, David Sandborn and Luther Vandross, to an appearance by Michele Ndegeocello on his last studio project as a soloist, Tales.

Miller is also jazz's foremost virtuoso funkmeister of the electric bass. His mastery of his instruments extends far beyond his own best-known signature technique, switching from explosive thumb slapping and two-handed arpeggios to passionate soloing on a fretless 5-string. Miller is perhaps the only bassist I've heard who dared to cover a Jaco Pastorius classic ("Teentown") convincingly, and succeeded without mimicking Jaco's singular sound. Of all his great recording projects, Miller find's the best context for his many talents via his solo projects; Live and More includes 8 live tracks, and two bonus studio tracks, and Miller's fans who haven't seen him perform live in a solo context will find documented here both tight arrangements, a band worthy of Miller's vision, and Miller stretching out as soloist unconfined by the brilliant, but completely premeditated arrangements which characterize his studio productions. An extended version of Miller's "Tutu" was recorded in Hollywood's Catalina Bar & Grill finds Miller commanding a supporting cast of contemporary jazz leaders, which includes keyboardist Bernard Wright, saxophonist Kenny Garrett, trumpeter Michael Stewart and long-time Pastorius' associate, guitarist Hiram Bullock among others.

Miller is still in a formative stage of his solo career, despite his vast experience as a session man and producer. His incredible musical energy and often brilliant sense of matching rhythm to melody shine in covers of "Strange Fruit," and "Summertime." "Summertime," and two other originals feature guest vocals by Lalah Hathaway, however Miller's instrumental material by far stands out, especially Miller's "Maputo," a genuine contemporary jazz standard. As a soloist, Miller is one of the few commercial forces in contemporary jazz to bring the integrity of an instrumental master to his music, and the bands energy often veers into foray's of high-octane fusion. Those who are bored or disdain Davis' Tutu-era music, will likely find little to draw them to Miller's solo work. With Live and More Miller demonstrates here he's a true master of multiple genres of modern jazz - and one of the few artists in R&B oriented contemporary jazz and fusion who commands enough personality and originality to stand out in an otherwise crowded, predictable musical landscape.