The Dixieland Ramblers: Live And Lighting It Up In New Orleans 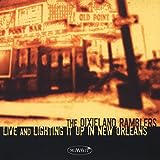 Five of the six traditional jazz artists heard here have paid their dues with The Dukes Of Dixieland. While it was a relaxed night out on the town for this group of veterans, recorded in action at the Old Point Bar across the river in Algiers, the session emphasizes superb virtuosity from each of the six artists. Clarinetist Michael Bennett and trumpeter Kevin Clark carry the load in time-honored roles. Both are on fire this night, and never seem to run out of ideas. Bennett shines on the up-tempo numbers, such as “Clarinet Marmelade” and “That’s-a-Plenty.”

Trombonist Harry Watters, a soldier and a member of the U.S. Army Blues Jazz Band in Washington, DC, adds one bright spot after another. His unique feature on “Muskrat Ramble” contributes an individual flavor to the session that reveals both humor and an improvisational charm. Pianist Tom McDermott rambles in the true spirit of trad jazz. His stretch on “Royal Garden Blues” reveals fresh ears for this older form of music.

The amplified bass gives The Dixieland Ramblers a contemporary sound: both fluid and upbeat. Walking for the most part, Jay Goetting also provides a few solo spots during which his bass recalls the fluid timbre of a tuba. With piano and drums, he leads the band’s driving rhythmic force.

While the live session introduces several rough spots – awkward transitions from one soloist to the next – the band’s spontaneity and technical mastery has created a recommended album that’s sure to delight most listeners.