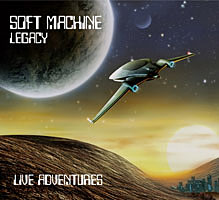 Many have found elements of jazz in the music of European progressive rock artists such as Gong, Can, King Crimson and even, to a certain improvisational extent, Yes. Soft Machine Legacy continues this...umm, legacy with an amoeba-like lineup (mostly) from alumni of the original progressive instrumental group Soft Machine: guitarist John Etheridge, bassist Roy Babbington and drummer John Marshall, joined by like-minded improviser and former Gong member Theo Travis on saxophones and flute.

Recorded in Austria and Germany during Soft Machine Legacy's 2009 European tour, Live Adventures sings the rare instrumental jazz-rock song that doesn't seem to cry out for vocals: unspoken and invisible connections between these musicians say plenty enough. "The Nodder" may be based on an electric guitar melody doubled by bass with contrapuntal saxophone, but it's Marshall who keeps this "Nodder" moving: he swirls snare and cymbal pulses into dizzying rhythmic pools and waves that don't move straight ahead in any definite direction but concentrically ripple out, then back, and emerge more loud and aggressive as Travis' improvisation grows more strident and free.

But most of these Adventures are charted by guitarist Etheridge and saxman/flutist Travis. Travis shows his free jazz saxophone bent in the more knotty passages of "Grapehound," and unwraps from "Gesoreut" futuristic Rahsaan Roland Kirk and electrified Eddie Harris sounds that seem to echo back from a distant planet. His flute layers simple, gorgeous cover for Etheridge's profoundly beautiful insight into the blues-based ballad "Song of Aeolus," and their dual lead lines supercharge the fusion "In the Back Room," with Etheridge harmonizing in twisting psychedelic colors and chopping out blocks of funk. "The Relegation of Pluto/Transit" is an amplified, "let's all play at the same time," intellect-cleansing freakout.

Live Adventures is dedicated to two deceased Soft Machine bandmates, saxophonist Elton Dean and bassist Hugh Hopper. Hopper's legacy is reprised in this live set by a colorful abstraction of his composition "Facelift" that somehow floats apart into separate, simultaneous guitar and saxophone passages and yet remains together. The dawn of "The Last Day" grows out of its ending, an organic hypnotic jazz-rock jam that swells and then fades into silent nothing.

Has Riff II; Grapehound; The Nodder; In the Back Room; Song of Aeolus; The Relegation of Pluto/Transit; Gesolreut; Facelift; The Last Day.