By WOODROW WILKINS
March 3, 2005
Sign in to view read count 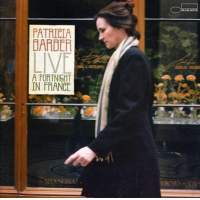 The mere mention of a woman speaking French is enough to set many men's imaginations to wandering. If she's singing it, and has a pleasant voice to boot, the listener—male or female—can't help but smile. Although Patricia Barber only offers Français on one track of her latest album, Live: A Fortnight in France , it is one of the many high points.

Recorded early in 2004 at clubs in three French cities (L'Arsenal in Metz, La Coursive in La Rochelle, and La Cigale in Paris), the album presents Barber on five original songs and five covers that show her range and diversity, from the romantic to the edgy.

"I've always been a Francophile,â‚¬? she says. "I love the people, the language, the food and wind. And I love Paris most of all.â‚¬?

No doubt, after hearing this music, Paris loves her as well. The album contains an hour's worth of music that highlights pianist/vocalist Barber and her sidemen—Neal Alger, guitar; Michael Arnopol, bass; and Eric Montzha, drums—in a truly improvisational setting. At times they're mellow and elegant; at times, they're sizzling. Either way, the audiences appreciate the quartet's expression, tightness and energy.

This is particularly true on such tracks as the aptly named "Crash,â‚¬? a funk-grooved Barber original. All players get a moment in the spotlight, but it's definitely a group piece. Barber also revisits two songs from her 2002 CD Verse , one of them being the charming "Dansons La Gigue!,â‚¬? a beautiful recollection of a love affair with French lyrics by 18th Century French poet Paul Verlaine. Later in the program, the quartet offers a cover that's a part of their regular act, the Beatles' "Norwegian Wood.â‚¬? This seven-minute offering features Barber first in a light vocal/piano solo that does justice to the original. When bassist Arnopol joins, the track takes on its instrumental and improvisational air, with the other musicians entering the fray at the appropriate times.

This is a textbook example of why it's not enough to cover someone else's song. To make it relevant, one has to adapt it, make it one's own—which Barber and her crew accomplish in sterling fashion. Live: A Fortnight in France is Barber's eighth release. This 50/50 balance of new music and newly interpreted covers provides an excellent way to introduce fans who aren't familiar with her music, as well as energize those who are.