By GLENN ASTARITA
March 5, 2016
Sign in to view read count 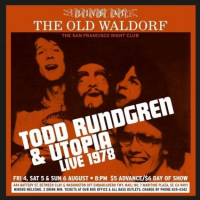 Live 1978 at The Old Waldorf San Francisco venue is a continuation of the Todd Rundgren archive series by UK- based Esoteric Recordings. Previously unreleased, the engineers' remastering effort seems to have paid off, as the overall sound is acceptable; although, the lower-end bass response is a bit weak. This concert was originally recorded for a broadcast by local radio station K-SAN and includes pieces culled from Rundgren's solo albums and Utopia's body of work.

Rundgren's pop legacy includes his artisanship as a multi-instrumentalist, producer and sound engineer. He was always at the forefront of technology, but is also a badass rock guitarist, highlighted on this live date along with keyboardist and pioneering analog synth wiz, Roger Powell. Essentially, the program boasts a vibrant mix of pop and prog rock with lots of pizzazz as Rundgren tears it up on guitar atop the pulsating grooves. However, there are spots where the musicians' vocal choruses are washed out against the thrusting motifs, but not necessarily a deal-breaker from a holistic perspective.

"The Last Ride" is a tender blues rock ballad, featuring Rundgren's soft and dreamy vocals. Elsewhere, Powell's inventive and multi-purposed use of synths augment some of the band's scintillating and aggressively exercised crash and burn episodes. Moreover, the prog element nicely complements many of the leader's good-natured and catchy vocal choruses, highly evident on the lovely "A Dream Goes On Forever," which is a ballad performed solely by Rundgren, accompanying himself on piano.

The group flexes muscle again on "Eastern Intrigue/Initiation," as the leader renders some downright blistering guitar licks and goes toe-to-toe with Powell's stinging synth lines. Rundgren closes the set with an obligatory performance of his timeless chart-topping classic "Hello Its Me." Here, the audience sings along, coinciding with its zealous reception throughout this enlivening set that is a jubilant blast from the past.

CD 1: It Wouldn’t Have Made Any Difference; Love of the Common Man; Trapped; Abandoned City; The Last Ride; The Seven Rays; Can We Still Be Friends; Back on the Street. CD 2: You Cried Wolf; Gangrene; A Dream Goes On Forever; Black and White; Eastern Intrigue/Initiation; Couldn’t I Just Tell You; Hello It’s Me; Just One Victory.