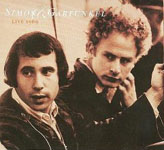 Recorded during performances in October and November '69 for what was supposed to be the live album follow-up to Bridge Over Troubled Water (which the duo had recorded before these concerts but was not yet released on Columbia), Paul Simon and Art Garfunkel capture on Live 1969 the mood of their generation changing. That live album never came out (until now) because during those dates their mystic musical communion was disintegrating, although you'd never know that from its joyful sound.

Simon & Garfunkel open ("Homeward Bound") and close ("Kathy's Song") this set as a duo but mostly performed with the band with which they recorded "Bridge Over Troubled Water." From the outset, their interwoven vocal harmonies are simply beautiful—Garfunkel's wordless, cooing accompaniment to Simon's verses—more of a sound, like a flute, than a human voice, in "Homeward Bound." Jazzheads might even imagine their respective deliveries—Simon more dry and literate compared to Garfunkel's angelic yearning—as the '60s pop vocal equivalent to Stan Getz and Chet Baker, especially as their two voices create the unique harmonic sound of "At the Zoo" and "The 59th Street Bridge Song (Feelin' Groovy)."

Garfunkel's voice is so angelic and beautiful, as it soars through Simon's confessional "For Emily, Whenever I May Find Her" that it's almost painful, serving a sad reminder that life in reality almost never sustains the beauty of its promise. Ironically, "Scarborough Fair / Canticle" sustains that awesome beauty. Garfunkel's voice with only Knechtel's piano, "Bridge Over Troubled Water" is a transcendently emotional, revelatory performance; the audience's cheer at its finish is ecstatic, more than merely enthusiastic.

Live 1969 is a tender portrait of an often innocent time. (Art's not entirely angelic, though, and some of his notoriously dour personality slips out while introducing the band before "The Boxer." When someone in the crowd shouts out that the band needs to be louder, he archly sniffs, "Keyboards should be louder, eh? What label do YOU produce for?") Time has since moved on, bringing new poignancy to the sentiments underlying "Old Friends / Bookends Theme," and different meaning to a line like "How terribly strange to be seventy," not only for Simon & Garfunkel but also for their attendant generation.

Visit Paul Simon and Art Garfunkel on the web.

Homeward Bound; At the Zoo; The 59th Street Bridge Song (Feelin' Groovy); Song for the Asking; For Emily, Whenever I May Find Her; Scarborough Fair/Canticle; Mrs. Robinson; The Boxer; Why Don't You Write Me; So Long, Frank Lloyd Wright; That Silver-Haired Daddy of Mine; Bridge Over Troubled Water; The Sounds of Silence; I Am A Rock; Old Friends/Bookends Theme; Leaves That Are Green; Kathy's Song.