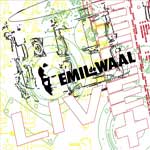 Multi-instrumentalist Emil de Waal's Live + represents both the mirror image and logical continuation of his previous release, Emil de Waal + (RMK Records, 2005). The earlier record used the computer as a member of the band in a studio setting. This offering takes the concept further by recording his jazz electronic live shows in Denmark, removing audience response, and then post-processing it in New York and Copenhagen studios.

In this respect, de Waal is following the path explored by guitarist David Torn on Prezens (ECM, 2007). Like Torn, de Waal takes music which incorporates some electronics in performance, brings it into the studio and treats it further, often including additional electronic processing.

In general, de Waal's music has more of a techno-rave edge to it than Torn's, but Live + does move farther away than its predecessor from the simple rhythms that dance music implies. The various instruments can be recognized to differing degrees throughout the tracks, but the aim is not so much solos or even timbral clarity, but a layering that gives each track its own unique character.

The moods vary widely. "Flamenco" is a drifting, semi-mesmerizing peaceful piece, leading to "Johnjohn," with its very strong two-chord vamp and robust drumming. "Damnak" starts with a simply vocalized melody, but ultimately becomes almost anthemic. "Sessionhumor" sounds spliced together with "Damnak, and serves as a kind of spacey coda to it before segueing into the pop feel of "Pejs, followed by the quite beautiful "Dabob."

De Waal's music, based on this recording and given the presumption of the rhythmic/techno genre it inhabits, would be interesting heard live. The fact that post-production has created something new would be hidden from the casual listener, but the album does stand on its own.

While the concept of progress in art is a knotty subject, Live + does have the feel of successfully extending the principles laid down on Emil de Waal +, and makes for an engaging listen.