Little Steven & The Disciples of Soul at the Paramount 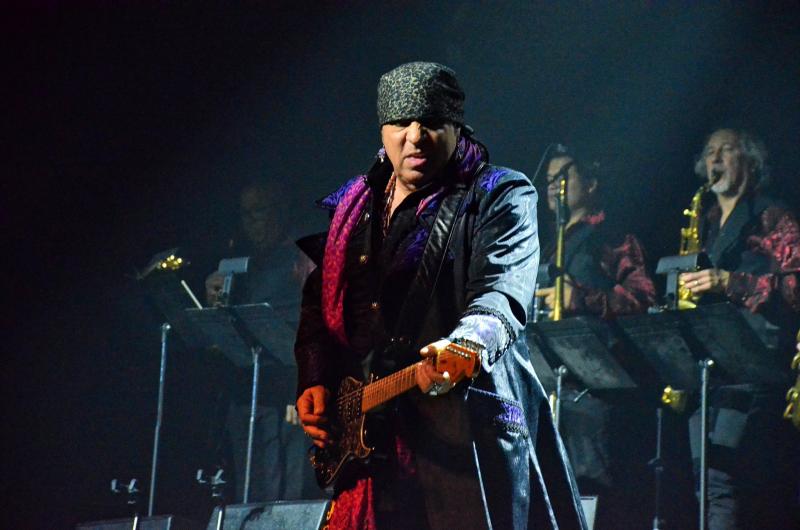 Ace sideman, actor, disc jockey, label chief, social activist, philanthropist, solo superstar. There really is nothing that Little Steven can't do. Born Steven Lento in Boston, MA in 1950. He lived in Watertown, MA until 1957, when his mother remarried and he took the last name of his stepfather—Van Zandt. Soon after the wedding, the family moved from MA to NJ.

Van Zandt is a member of Bruce Springsteen's E Street Band where he first adopted the stage name Miami Steve. In the mid-'70s, Van Zandt became a songwriter and producer for fellow Jersey shore act Southside Johnny and The Asbury Jukes. He also received production credits on the classic Springsteen albums The River (Columbia Records, 1980) and Born In The U.S.A. (Columbia Records, 1984), produced artists such as Gary U.S. Bonds, Lone Justice, and others. He is also known for his roles on the TV shows The Sopranos and Lilyhammer.

In the '80s, Van Zandt began his solo career, adopted the moniker Little Steven and created Little Steven and The Disciples of Soul. In 2014, the Rock 'n' Roll Hall Of Fame came calling and he was inducted as a member of the E Street Band.

Touring behind his first solo release in nearly twenty years, on his first solo tour in almost twenty-five years, Little Steven appeared at Huntington, NY's the Paramount and delivered an exhilarating show that was a rock 'n' roll revival, a musical history lesson, a soul-infused trip down memory lane and, most-importantly, a powerhouse performance.

Opening with "Even The Losers" in tribute to the late Tom Petty, Little Steven & the Disciples of Soul proceeded to light the venue on fire by performing an approximately two-and-a-half hour set featuring much of the material from the Soulfire (Wicked Cool/Big Machine/UMe, 2017) album. Following the tribute, Little Steven (dressed in his scarf, bandana, long coat and frilly shirt) and his 11-member band (featuring multiple back-up singers and a horn section) dove right into "Soulfire," "I'm Coming Back" and the Etta James cover "Blues Is My Business"— the first three songs on the album. Following this trio of tunes, he addressed the crowd, stating, "Good evening! This place is funky. I like it!" The crowd erupted and got even louder when the band launched into "Love On The Wrong Side of Town," which he and Springsteen originally wrote for Southside Johnny.

The performance also featured a superb take on "Angel Eyes" from his 1982 solo debut Men Without Women (EMI Records) and a powerful "Standing In The Line Of Fire," which was written for Gary "U.S." Bonds, and on this night featured guest vocals by Bonds, himself. The Long Island native was in fine voice and left the crowd buzzing. Little Steven also offered up "Saint Valentine's Day," "I Saw The Light," the doo-wop infused "The City Weeps Tonight," paid tribute to James Brown with the horn-filled "Down And Out In New York City" and "Princess of Little Italy" all from Soulfire.

"I Am A Patriot" got the attention of and a huge cheer from the more political audience members with the "I ain't no Democrat/And I ain't no Republican/I only know one party/And it is freedom" lyrical passage. "I've Been Waiting" as well as "Groovin' Is Easy," the soulful "Ride The Night Away" and the Latin-influenced political dance rock of "Bitter Fruit" from 1987's Freedom No Compromise (EMI Records) kept the funky R&B groove going. The main set closed with a sweet version of "Forever" (from Men Without Women) whose video received heavy rotation by MTV.

The encores featured the appropriate "I Don't Want To Go Home." The crowd which had spent the majority of the evening on its feet, were now dancing in the aisles with smiles and joy and happiness on their faces. "Out Of The Darkness" closed out the performance. Little Steven alluded to the current political climate when he said that as a group we'd see our way through the darkness.

The evening was a celebration of rock, soul, R&B, doo-wop, jazz, blues, and more—specifically that hard to describe Jersey sound. The music was fantastic and Little Steven was clearly in a great mood. Though he made his bones as a member of the E-Street Band, Little Steven continues to prove that he, in his own rite, is a huge talent. To those in attendance, who may not have realized it prior to this evening, Little Steven, the musical encyclopedia, influenced Springsteen as much as Springsteen influenced him. And, thankfully, both artists continue to deliver that signature Jersey sound.