Little Feat: Skin It Back: Live in Germany

By DOUG COLLETTE
January 3, 2010
Sign in to view read count 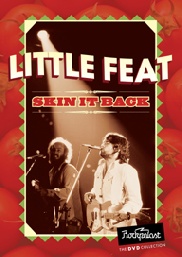 Little Feat
Skin It Back: Live in Germany
Eagle Vison
2009

When the original four-man lineup of Little Feat splintered, founding members guitarist/vocalist/songwriter Lowell George, keyboardist/vocalist Bill Payne and drummer/vocalist Richie Hayward enlisted percussionistSam Clayton, bassist Kenny Gradney (from Delaney and Bonnie's band) and guitarist Paul Barrere, at the same time adopting an approach rooted in the second-line rhythm of the The Meters. Little wonder then Payne takes a piano solo in the middle of "Dixie Chicken" that owes as much to Professor Longhair as Huey Meaux.

This lineup of the group had as firm a grasp of infectious rhythm as any band from New Orleans would be proud of. The idiosyncratic likes of such material as "Fat Man in the Bathtub" distinguished this Little Feat ensemble from mere copyists of the NOLA natives and, in fact, most of their rock contemporaries who aspired to more technically sophisticated musicianship and material. Titular leader George, once a member of Frank Zappa's band, held no truck with such an approach, which is why he leaves the stage when the group navigates its way through the fusion instrumental, "Day at the Dog Races." At this point in 1977, Little Feat had not fractured along such stylistic lines, nor had George becomes truly estranged from his band mates. So Skin It Back is thus an essential documentary of a great band near its peak.

Few American bands could dig so deeply into an unusual groove as this version of Little Feat. Their grasp of the beat was as unorthodox as Lowell George's approach to playing slide guitar: he preferred to play the notes most guitarists would leave out. His style of singing was nearly as recognizable an asset too, because his blues phrasing had character that Barrere could only mimic and Payne never aspired to. Hayward is a comparable wonder as he concocts patterns that mirror George's guitar playing: hard to follow but impossible not to admire (or move to). During the best moments of their performance on Germany's Rockpalast,(the debut broadcast of the series by the way) every member of Little Feat is dancing.

The thirty minutes of bonus material included on this single DVD reaffirms the impression of the main content. With the notable exception of the previously-unreleased version of "Rock and Roll Doctor," it contains material repeated from the official show, but, amidst the occasional horseplay—and one breakdown that aborts "Old Folks Boogie"—this footage illustrates how naturally this music came to the band. And while there's no actual sense of the musicians working on their music, such as exchanges on arrangements, it nevertheless gives some insight into the effort expended even by professionals of the highest order—laboring, albeit with a palpable sense of fun, on their distinctive style.

Little Feat's full set on this television production isn't exactly captured in high-tech style, but the video shoot is acceptable enough on its own terms, curiously offering few shots of the audience during the music in progress. This is by no means a deluxe package, but the multiple essays in the booklet illustrate the draw Feat had on its fans, an attraction as mysterious and abiding as the group's own singular persona.

The bonus content reaffirms what those familiar with the evolution of Little Feat will readily acknowledge: by the time the main feature is complete, with acapella singing by the whole group and George leading the band on acoustic guitar during his country classic, "Willin,'" the dissolution of this group was as painful to recognize as this scintillating performance is to celebrate.