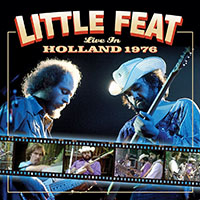 A band that has suffered more than its share of losses over the years—most significantly, group cofounder/primary singer/songwriter Lowell George, when he died of a heart attack in 1979 at the age of 34, but also the more recent passing of drummer Richie Hayward in 2010 at the age of 64, who joined the band for its second recording, Sailin' Shoes (Warner Bros., 1973) and became its hard-grooving heartbeat right through to Join the Band (429 Records, 2008)—it's almost impossible to believe that Little Feat is getting ready to celebrate its 45th anniversary in 2015.

With keyboardist Bill Payne the only remaining member of the group he co-founded with George at the start of the 1970s, Little Feat released its first, eponymous album in 1971 on Warner Bros., which would serve as the group's label through to 1990's Representing the Mambo. But it was only with a significantly revamped lineup and the broadening stylistic purview of 1973's Dixie Chicken that the group began to garner popular acclaim that matched the critical acclaim met by its first two recordings. In addition to recruiting bassist Kenny Gradney—a perfect match for Hayward—and percussionist Sam Clayton, Dixie Chicken also fleshed out the front line with the significant addition of Paul Barrere, the guitarist/vocalist who, despite being born in Burbank, California, brought a stronger New Orleans vibe to the band compositionally, and was the final piece in the puzzle that grew the band from a quartet into a sextet.

It was a winning combination—for awhile, at least, until George began feeling pushed out of his own band compositionally, as Payne and Barrere began to assert a greater interest in jazz fusion that peaked with the release of Time Loves a Hero in 1977. It ultimately led to George disbanding the group after the release of what would become its biggest seller yet, the exhilarating Waiting for Columbus (1978), an album that, with the group expanded even further by the addition of the Tower of Power horns, was a live album on paper only, as George needed to overdub many of his guitar and vocal parts in post-production—the consequence, no doubt, of failing health due to a confluence of circumstances...all bad.

While George had expressed plans, days before his death, to reunite Little Feat without Barrere and Payne, the irony is that, with his passing while on tour to support his first solo album, 1979's Thanks, I'll Eat It Here (Warner Bros.), it was ultimately Payne, Barrere and Hayward who instigated the reformation of the group for 1987's Let It Roll—with Pure Prairie League singer/occasional guitarist Craig Fuller occupying the general space George left vocally when he died and, with guitarist/multi-instrumentalist Fred Tackett added to once again flesh out the front line, turning Little Feat into a septet. Still, that's another story for another day, as the group has continued to record and tour, with Shaun Murphy replacing Fuller in 1993 until her departure in 2009, when the group decided to continue on in the sextet format of its earlier days.

Recent years have seen the release of archival George-era Little Feat footage both on CD and DVD, including 2012's Leftfield Media find from a 1973 radio performance, American Cutie; 2013's release of a 1975 radio broadcast as Hellzapoppin' (All Access); and now, Live in Holland 1976, a CD/DVD combo from Eagle Vision that documents an open air performance at Holland's Pinkpop festival in June, 1976.

If it's a relatively short set—the CD's 63-minute set trimmed down, for reasons unknown, to a 54-minute performance on DVD—it's still a valuable one, catching the group delivering a set of material going as far back as Sailin' Shoes for an incendiary set-closer, "Teenage Nervous Breakdown," in addition to the greasy vibe of "Cold Cold Cold" and more eminently rocking "Tripe Face Boogie"—the latter two songs later revisited as a medley on the group's 1974 studio recording Feats Don't Fail Me Now, from which the buoyant title track is also culled.

There's also latter-Feats fare, though only two songs come from Little Feat's then-most recent studio album, 1975's The Last Record Album: the funkified "One Love Stand" (on CD only) and "All That You Dream," a song which became a popular AOR song for Linda Ronstadt but here is sung by George with characteristic looseness, removing the cigarette from his mouth just in time to play the visceral slide intro to the first verse. The rest of the set is culled from Dixie Chicken, including the N'Awlins-flavored titled track and slow burn of "Fat Man in the Bathtub"; and, also from Feats Don't Fail Me Now, Barrere's funky opener, "Skin It Back," Payne's sole vocal feature, "Oh, Atlanta" (also only on CD), and George's "Rock and Roll Doctor"—still remarkable forty years on for its lack of conventional verse-and-chorus form while remaining incredibly catchy, powerful, and flat-out one of the best songs George ever wrote, in collaboration with longtime friend Martin Kibbee. Who else could write a line like "Two degrees in bebop, a PHD in swing / He's the master of rhythm, he's a rock and roll king"?

It's hard to know if the tensions that would ultimately break the group up were already seeping in, but it's noticeable that the only members of the band who seem to be breaking a sweat are Clayton and, in particular, Hayward, who also seems to be the only one that looks like he's having any real fun, though Gradney looks engaged and, as the set progresses, so, too, does George. But there's precious little eye contact going on, other than from Hayward in the backline, and Barrere—who, despite a largely deadpan expression, is the group's most animated performer, though sometimes at the expense of time and volume, on more than one occasion rushing the beat.

Still, with music this good that's a relatively small quibble, and who knows if other issues might be responsible for how the band appears—poor monitors, for example, causing Barrere's issues with time. As the group segues from "Cold Cold Cold" into "Dixie Chicken," Barrere and Payne engage in some interplay that suggests there's more camaraderie than first appears, and George gets into some serious chicken-necking during a brief spot for Clayton later during the same song. George's slide playing is a sad reminder of what might have been, with a tone to die for and a visceral ability to emote, in almost a vocal way, with nothing more than a metal tube and a set of strings. Barrere would assume a more dominant role in the band after George's passing, but as good as his playing is here, it's invariably overshadowed the minute George picks up his slide and begins to play.

Sonically, the recording is in good shape, with both stereo and 5. 1 surround sound mixes clear, crisp and punchy, and a multi-camera 4x3 aspect ratio video that's only lacking in a good wide angle shot of the entire band. And if the clearly zoned out members of the audience who are occasionally seen throughout the set are any indication, plenty of fun was being had then—and there's still plenty to be had now, 38 years after the fact, with Little Feat Live in Holland 1976.