Connie Evingson: Little Did I Dream: Songs by Dave Frishberg 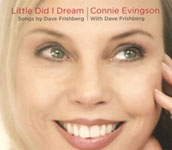 The late Tip O'Neill once said, .."All politics is local." This certainly can be said for jazz also. All of America's metropolitan areas have a jazz contingency. Chicago has Kurt Elling, Patricia Barber, and Von Freeman; Washington DC has Buck Hill; and New York has who knows how many? The Twin Cities, Minneapolis-St. Paul, also has noted jazz talent in Dave Frishberg and vocalist Connie Evingson.

Pianist/vocalist Frishberg, a native of St. Paul, has a long jazz résumé that includes School House Rock (Rhino, 1996), as well as having written numerous songs recorded by Blossom Dearie, Mel Tormé, Rosemary Clooney, Diana Krall and Tony Bennett. Frishberg exists in a rarified realm where his only peers in jazz songwriting are the great Mose Allison and Bob Dorough.

For her part, Connie Evingson has released a spate of fine recordings that include Let It Be Jazz (Summit, 2003), The Secret of Christmas (Minnehaha Music, 2003) and Gypsy in My Soul (Minnehaha Music, 2005). With the release of Let It Be Jazz, a collection of Beatles tunes, Evingson began a successful run of thematic recordings that addressed holiday fare and Le Hot Club Django. Continuing in this direction, Evingson rolls out a festive collection of Frishberg classics, illustrating why Frishberg and Evingson are such essential fixtures to 21st Century jazz.

Frishberg's fresh, smart lyrics are well-delivered by the ultra-hip Evingson, who reveals through her immense talent the diamonds that are Frishberg's lyrics. The title song, as well as the beautifully sexy "Peel Me a Grape," reveals Frishberg as a masterful poet and lyricist in the same vein as Ira Gershwin, Oscar Hammerstein, and Lorenz Hart. He is a master of the internal rhyme, an essential component to any successful lyric writing.

Evingson's vocals are certain and sure. She deftly navigates the strolling' "Zoot Walks In," joined by Frishberg in the introduction, where the singer's vocalese power is displayed as well as Frishberg's keen pianism. "I Want to be a Sideman" quotes Glenn Miller's "In the Mood" musically and a musician's simple wish to be, not the leader, but a part of a band. "My Attorney Bernie" is great fun. Evingson and Frishberg swing for the fences and knock it out with Little Did I Dream.

Little Did I Dream; Peel Me a Grape; Our Love Rolls On; Zanzibar; Can't Take You Nowhere; Heart's Desire; Wheelers and Dealers; Zoot Walks In; Eastwood Lane; You Are There I Want to be a Sideman; My Attorney Bernie; Snowbound; Listen Here.