By TROY COLLINS
November 25, 2012
Sign in to view read count 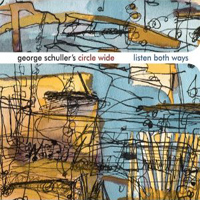 Listen Both Ways is the first studio recording by drummer George Schuller's longstanding Circle Wide quintet to concentrate primarily on his original compositions. The group's previous Playscape releases, 2003's Round 'Bout Now and 2008's Like Before, Somewhat After, paid homage to the seminal efforts of famous post-war bandleaders—trumpeter Miles Davis' Second Great Quintet on the former and pianist Keith Jarrett's American Quartet on the latter.

Six of the album's eight tunes are staples of the unit's live sets, with nuanced arrangements of pianist Carla Bley's serene ballad "Jesus Maria" and under-sung writer Margo Guryan's Ornettish "Edwin" rounding out the program. The corkscrew melody of the episodic travelogue "A Map Would Help" evokes a similar Coleman-esque spirit, although the majority of Schuller's post-bop themes continue to find stylistic accord in the ground breaking electro-acoustic territory his band previously explored in its interpretations of Davis and Jarrett's oeuvre.

Circle Wide has been Schuller's primary ensemble for the past thirteen years, with the current lineup together since 2009. Tenor saxophonist Peter Apfelbaum brings robust lyricism and throaty expressionism to the proceedings, occasionally tempering his fervent excursions with delicate ruminations on melodica, as highlighted on the gorgeous "Jesus Maria." Sharing a penchant for scintillating metallic timbres, guitarist Brad Shepik and vibraphonist Tom Beckham complement each other perfectly. Shepik's chameleonic approach veers between the searing arpeggios of "Store Without A Name" and the glassy fretwork that adorns the languid "Newtoon," which simultaneously spotlights Beckham's effervescent contributions. Dave Ambrosio's pliant bass lines underpin the leader's cascading rhythms, providing melodious lift to an array of ebullient motifs, underscored by modulating time signatures and atmospheric rubato interludes.

From the optimistic folk forms of "Could This Be The Year?" and the menacing blues abstraction "Better Than Prozac" to the angular hard bop swinger "Bed Head," Circle Wide expounds on a diverse selection of works that embody the same vanguard spirit espoused by visionary fusion innovators like pianist Paul Bley, vibraphonist Gary Burton and guitarist Larry Coryell. Expertly integrating freewheeling interplay with sophisticated charts, Listen Both Ways is the group's most definitive statement, and Schuller's most engaging session as a leader to date.

Could This Be The Year?; Store Without A Name; Better Than Prozac; Edwin; Jesus Maria; A Map Would Help; Newtoon; Bed Head.