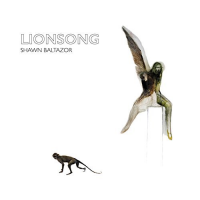 It's difficult to resist the temptation to praise Shawn Baltazor's startling, diverse, incisive, multifaceted drumming at the expense of his equally impressive abilities as a composer and bandleader. Baltazor is one of the legions of young, gifted New York City area artists whose catholic tastes in music are transformed into idiosyncratic, open-ended methodologies, which ultimately engender sounds that stand on their own and resist being shoved into conventional categories.

Throughout the twelve tracks of Lionsong, his stunning debut as a leader, it's best to relinquish any preconceptions of the conventional methods and parameters of jazz performance, and simply concentrate on what Baltazor and his cohort bring to the table. His band is a winning combination of veterans with name recognition—tenor and soprano saxophonist Seamus Blake, guitarist Ben Monder, and bassist Ben Street— plus Baltazor and his contemporary, pianist Sam Harris. It's an unusually interactive and empathetic ensemble, which readily adapts to the leader's flexible compositions.

There's a striking, evolutionary quality to many of the cuts on the record. On "Momentum," an appropriately titled rave-up, things truly happen in the moment, as everyone gleefully leaps into the unknown while the groundwork assumes different forms, crumbles, and sometimes disappears altogether. Featuring Blake's deliberate execution of variations of the melody alongside of Harris' essential commentary, "A Beautiful Wind" is one long, slow, tantalizing buildup to a climax both lyrical and frenzied. From the first note, "Adrift" is vague, somber and cautious, with Harris gently feeding and interacting with Blake, who gradually becomes rather animated but never quite loses a feeling of restraint. A loosely coherent work that contains an air of abstraction, "Folklore" maneuvers through the repetitive tinkling of Harris' piano, Baltazor's persistent manipulation of a handful of jumpy, chattering rhythms, Blake's savvy way of working in relation to and outside of the parameters of the drummer's beats, and Monder's irregularly spaced, echoing chords and single notes.

The glue that holds the record together—and perhaps makes the collection of vivid, adventurous collective and individual performances accessible to a wider range of listeners—is Baltazor's gift for writing distinctive themes, most of which possess a somewhat wistful undertone. "Nostalgia" is one of a few tracks that wouldn't sound out of place in a movie soundtrack. It's also one of the cuts that require little or no improvisation to make a vivid impression. Even though it contains no particular stylistic referent, the unhurried ease in which it unfolds, with each instrument contributing to the low-key ambiance, bears a resemblance to some of the songs written and performed in the early-to-mid twentieth century. Lazy and purposeful, witty and dour, unassuming and insistent, "Chance" is tightly structured, filled with contradictions, and ultimately eludes easy description. A repeated theme evolves into something more urgent, and finally the band, led by the persistent thwack of Baltazor's snare, roars to a brief climax.

Residing in each composition, interacting with and stirring everyone in the band, as well as invariably finding creative ways of integrating his identities as an instrumentalist into the mix, Baltazor's drums are essential part of the project. On the other hand, Lionsong doesn't feel like a drummer's record. It's clear that he wants the music as a whole to be front and center. There's a commonality and sense of connectedness to his drumming during tracks and/or segments, regardless of whether he's executing a steady pulse, free time, or various degrees in between. Throughout the shifts and detours in the music, you can perceive the purpose and use value of his extensive vocabulary. In contrast to the aggressive sticking during portions of "Momentum," there are many instances—"A Beautiful Wind," "Danse," and elsewhere—in which Baltazor utilizes various components of the drum kit to create small, meaningful frictions. It's as if he's discovering fissures in the music that only he can hear, and immediately reacting in ways that make the music sound richer and somewhat more complex; feeding a living organism that shuns the existence of repetition and routine.

With the release of Lionsong, it's clear that Shawn Baltazor is making a genuine contribution to the world of jazz and improvised sounds. It's not so much that he serves as a reminder of, or makes obvious, clear cut references to the tradition; rather, he ingeniously manages his talents in ways that push the music forward into a bright future.