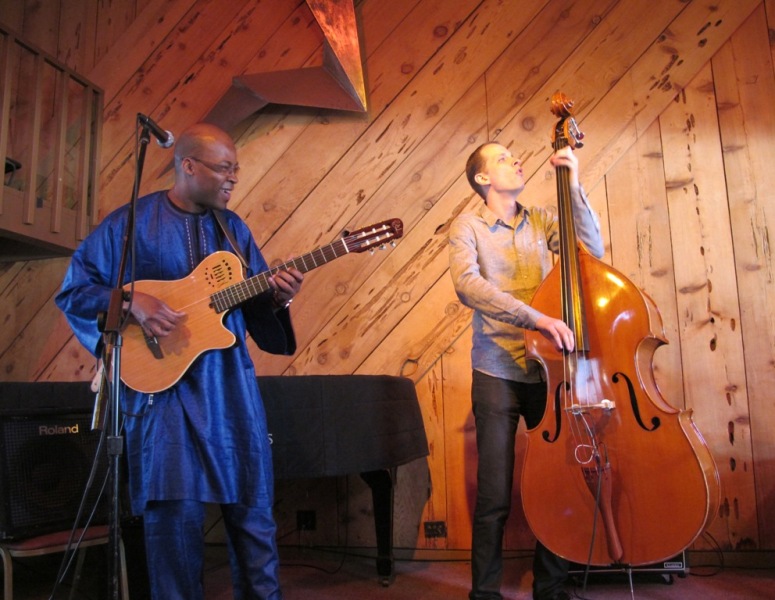 Knowing only that guitarist Lionel Loueke had an international reputation, expectations were put away, as we entered the concert curious to see and hear his unique trio. Born in the West African country of Benin, Loueke was accompanied by his stalwart sidemen, Swedish-born bassist Massimo Biolcati and Hungarian drummer Ferenc Nemeth. The playlist was selected from Loueke's two most recent albums, Mwaliko and the highly acclaimed Karibu (2008), both in Blue Note. When the trio took the stage, Loueke looked around and said, "Small is better," meaning that the intimacy of the Douglas Beach House (aka the Bach Dancing and Dynamite Society) is better than a large concert hall. He spread his hands and looked out at the Pacific Ocean and said, "What a beautiful place. How are you?"

With that, he took the lead into his opening piece, "Skylark." Nemeth followed, flowing in at first almost unnoticed using brushes on the ride cymbal, moving right along with Loueke's melody. Biolcati picked up the energy of the piece overall, and the trio struck an excellent balance between them. From that point on it was clear to all that this trio had a distinctive voice. It was with the second tune of the concert, Loueke's "Dream," that Loueke began to sing his lyrics, in the African language known as Fon, and while they could not be understood, it didn't matter because his sonorous voice became a fourth instrument to the group.

As a counterpoint to the two previous numbers, "Seven-teens" opened with Nemeth soloing heavily, especially his snare and floor tom, until Biolcati and Loueke joined in, at which point Nemeth slipped to the background, letting the bass and the guitar interact. Loueke not only played the strings on his guitar, but the body as well, intermittently, with Biolcati imitating him. Late in the number, Loueke's guitar sounded as though it was an organ.

As the concert proceeded and the audience became increasingly enthralled by these three masters, Loueke adjusted his guitar to mimic an African kalimba, an African drum, and a vibraphone, using delay on his vocals to bring overtones of authentic African jazz to the Douglas Beach House. Loueke's guitar had many voices, as did the entire trio. By the end of the first set, the audience joined in, clapping in time with the music.

The high energy of the second set contrasted nicely with the first, especially when the trio "Tim-Min," from Gilfema (ObliquSound, 2005). Loueke opened playing the strings of his guitar, but then merged into hitting the guitar's body and using it like a drum. Nemeth followed suit and came in right under the guitar, as Loueke suddenly punctuated the music with African lyrics. This high-speed, high-energy piece had a serious blend of textures and rhythms, the likes of which are difficult to find elsewhere. Biolcati held down a fast-paced rhythm and, midway through the piece, Nemeth let loose with a wickedly wild drum solo, the kind that remains in the memory for a long time.

This international trio kept its audience alert because of its unpredictability. By bringing in his African influence, Loueke is adding to jazz, possibly shaping it in a new direction, and giving it a fresh voice. Sometimes the word "unique" doesn't carry enough meaning to apply it to a situation like this. By the time that the evening wrapped, it was clear that Loueke had gone on a scintillating journey to a new form of jazz and it's no wonder that piano icon Herbie Hancock has dubbed Loueke a "musical painter." What a brilliant painting he produced at the Douglas Beach House.