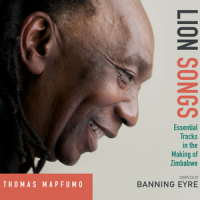 The constant political and social unrest in Zimbabwe stemming from its oppressed period of colonization when it was wrongly known as Rhodesia, spawned chimurenga music—the music of struggle and resistance. The artist who personified this musical activism is Thomas Mapfumo, the Lion of Zimbabwe. His unwavering dedication to this movement since the 1970's is the subject of a biography by ethnomusicologist Banning Eyre, best known for his production work at Afropop Worldwide. Eyre is also the producer of this record, and the songs compiled on Lion Songs is a musical companion to his book "Lion Songs: Thomas Mapfumo and the Music That Made Zimbabwe."

Attempting to cover such an extensive body of work as Mapfumo's recordings proved to be an arduous task, but Eyre was cleverly able to assemble a comprehensive and chronological sampling of Mapfumo's career from his early recordings in 1973 with the Hallelujah Chicken Run, through his 2010 output with the legendary Blacks Unlimited ensemble—founded in 1978—with which he is most recognized.

Mapfumo was a mainstay in the decolonization and anti-apartheid movements, and gained a formidable reputation as an outspoken critic of the intolerable Ian Smith regime during the years leading to independence. He then turned his lyrical wrath towards the corrupt leadership of President Mugabe, who turned out to be another ruthless despot. His music was censured and repressed, but gained a stronghold with the guerrillas fighting in the bush, just as much as with the common people seeking a voice they could identify with.

Lion Songs is an excellent opportunity to capture the essence of a true revolutionary with unwavering principles who threw the weight of his music against all adversaries, and lived to tell the tale. Due to relentless political pressure taking its personal toll, Mapfumo went into exile to America in 2000, where he remains to this date. But his music continues to cast a beam of hope back in Zimbabwe, where the struggle continues, and he is affectionately recognized as The Lion.