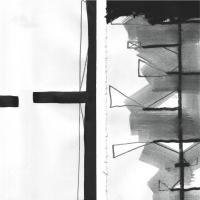 In the seven years since its inception, El Negocito Records, based in Ghent, Belgium, has established itself as one of the most adventurous and far-ranging independent labels on the European new music scene. The phrase "new music" is operative here because the label concentrates on improvisation in all of its musical guises. There are modern jazz offerings (e.g., Bambi Pang Pang's amazing Drop Your Plans with drummer Andrew Cyrille), free improvised outings (e.g., John Dikeman's Live at La Resistenza with Hamid Drake and William Parker), and lots of music from undefinable, multi-hyphenated realms. Which brings us to the work of plectrist Ruben Machtelinckx. To say he's an adventurous musician would be an understatement. He's literally and figuratively all over the map. All over the timeline, too. Listening to his last several albums, mostly drummerless collaborations with multi-instrumentalist Thomas Jillings (collectively the Machtelinckx / Jillings duo is known as Linus), fellow guitarists Hilmar Jensson and Frederik Leroux, and reed player Joachim Badenhorst, makes it no less difficult to figure out exactly where Machtelincx' inspiration comes from. On his albums, Appalachian banjos rub shoulders with ambient electronic doomscapes and free-jazz saxophones, baritone guitar duets could provide the musical setting for a Van Dyck painting or the action in a hip 21st Century coffee bar, and jazzy conversations arise between tenor saxophones and delicate fingerstyle guitars. It's an endlessly fascinating aesthetic, and one that Machtelinckx has clearly put a great deal of thought and sweat into.

On Linus + Skarbø / Leroux, Linus—the Machtelinckx / Jillings duo—works with a pair of familiar and like-minded musicians: Frederik Leroux and Oyvind Skarbo. Like Machtelinckx, Leroux plays banjo and baritone guitar in addition to guitar. He's responsible for the electric end of the guitar spectrum on this disk. Skarbø is a drummer and keyboardist. Here, he mostly sticks to drums and percussion, though he contributes striking Hammond B-3 textures to three haunting but brief group improvisations: "Vaag," "Vlaag," and "Vraag." Jillings, the other half of the Linus duo, is a really interesting jazz-based reed player who, like Machtelinckx, is totally at ease in a perplexingly wide variety of musical settings. Together, these musicians make some truly distinctive sounds which, as stated earlier, fuse folk, modern jazz, Medieval music, and experimental rock into something new and quite appealing; something cinematic, atmospheric, tuneful and soulful. What's really amazing about Linus + Skarbø / Leroux is that this music is authentic unto itself. Despite the array of disparate influences, there's not a breath of pastiche or eclecticism.

Both Jillings and Machtelinckx contribute compositions to Linus + Skarbø / Leroux. Jillings' "Woodstock" is a pleasant ramble; a mournful bass clarinet melody framed by kitchen sink percussion over a repeating, overdubbed banjo / baritone guitar figure. "Sketch" is a formal, almost Asian-sounding, banjo duet. Machtelinckx' pieces are similarly diverse. The haunting "Down" utilizes a hypnotic minor key banjo ostinato to create a doomy, foreboding atmosphere; multiplied by relentless malleted toms and an overtone-laden bass clarinet solo. "Laboeuf" is almost the complete opposite: a warm and gentle ballad with Jillings' husky tenor out front. Skarbø's drums cut in at the two-minute mark as the tune takes on the bucolic feel of a great lost Bill Frisell composition from his ECM days. A baritone guitar / guitar duet forms the core of "Finco," as Skarbø's brushes push the pace ever so slightly for Jillings' lush tenor. Is he improvising or playing a written melody? It's so beautiful that it hardly matters. And really, that's what this album is all about. Yet there's more to this tune; a cathartic electric guitar cuts across like a comet and eventually revisits the tenor saxophone melody, bringing some resolution.

If jazz is truly the "sound of surprise," then Linus + Skarbø / Leroux is the very definition of jazz. Surprises abound here. There's lots of improvisation, too. Yet, so much of this attractive, vibrant music seems rooted in the "other." This is not jazz-as-we-know-it. But it is profoundly fascinating.