By DAN MCCLENAGHAN
March 21, 2003
Sign in to view read count 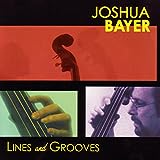 It's sort of retrograde—or perhaps it's a loop. The most exciting and innovative recordings in jazz are coming out on small labels these days. Just like in the early days of recorded jazz, small independent labels are bringing out the real sounds. Case in point: Jazzheads' new release from bassist/composer Joshua Bayer.

Lines and Grooves is a solidly mainstream affair, with the sax out in front of the rhythm section. It features eight Bayer originals that pay their respects to some of jazz's greats: Cedar Walton, Oliver Nelson, Miles, Bill Evans. Every year you'll hear two or three CDs with this line-up and this mainstream feeling—usually, interestingly, with relative unknowns—that just knock your socks off and jostle for position in those year-end top ten lists. This is one of them. It's got a clean, crisp, infectious sound, marvelous compositions, and a jewel of a cover (Gerswhin). The sax guy, Marty Nau, stands out front with a stingingly sweet sound, and within the confines of the groove he can be quite the freewheeling and inventive soloist.

The disc opens with the shining "J Cess," with keyboardist Bob Sykes leaning on the notes on his Fender Rhodes, giving things a bit more sustaining power than usual, sort of an organ- player's approach behind Nau.

"Tre," "Line" and "Third Line" have crisp newness to their sound, snappy. This is a tight yet inventive band playing some fine compositions.

And then there's the centerpiece: Gershwin's "Prelude." Beyond beautiful. Lines and Grooves is a start-to-finish solid (beyond solid) set of sounds; but this Gershwin fellow—in the hands of Bayer and company—deserves the repeat button treatment. Spare and gorgeous, Bayer's bass work here is a vibrant, throbbing undercurrent. And then there's "Blues for Now"; and I don't know if it's the composition or Marty Nau's sax approach, but I feel the ghost of Charlie Parker hanging around.

With so many small labels putting out the fine sounds, it's easy to let some great ones get by. Don't let that happen with Joshua Bayer's Lines and Grooves. Classic music by a first rate band.