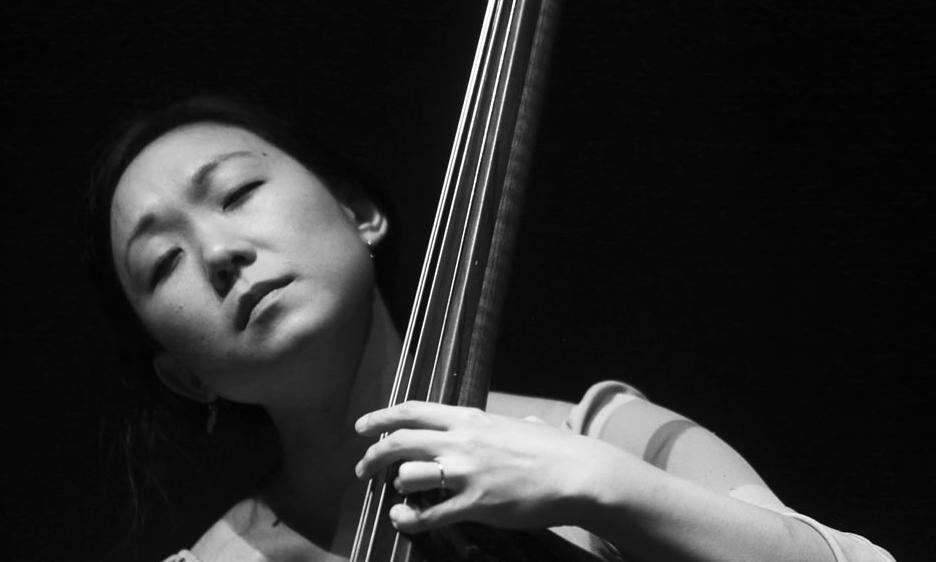 By ANGELO LEONARDI
September 11, 2018
Sign in to view read count

What is the bigger picture? Do you want to bring a sense of beauty in people's lives? Do you want to save a life with your music? I know that sounds very optimistic, but I think it is a good thing for everyone to think about.

Over the past decade, bassist Linda May Han Oh has been hailed as one of the most gifted bassists, bandleaders and composers of her generation. She is a virtuoso who can swing hard while keeping instrumental grace and precision, structuring her lines through a most free-flowing cascade of ideas. After completing her master's degree at the Manhattan School of Music in 2008, she recorded her debut album, Entry with trumpeter Ambrose Akinmusire and drummer Obed Calvaire. In the following years she has been working with heavy-weights like Pat Metheny, Dave Douglas, Vijay Iyer, Joe Lovano and Steve Coleman. We met Linda at the Bergamo Jazz Festival, Italy, to talk about her current activities and her most recent album Walk Against Wind (Biophilia Records).

All About Jazz: Let's start from your new quartet with whom you're playing in Bergamo. Greg Ward and Matthew Stevens are longtime collaborators. Is drummer Arthur Hnatek a new band member?

Linda May Han Oh: Yes. We played one show in Victoria. He played this music and he sounded fantastic. However, I have known him for a long time. He was playing with Tigran Hamasyan and other people in New York. The first time I met Arthur, I was teaching at the Banff Center in Canada. It's a jazz and improvisation program. At that time Dave Douglas was the director, I was one of the teachers and Arthur was one of the students... He already sounded great. He also went to the New School with a lot of people that I know and along the way we played a little bit in sessions, that sort of thing. We didn't do a lot of playing but he just stepped in all this music from day one.

AAJ: Walk Against Wind is your fourth record as a leader. Let's talk about this album for the people who don't know it...

LMHO: Walk Against Wind goes in many different directions at once. The connecting theme—as in a storytelling kind of journey —is the concept of ritual reward, choosing paths that may not be the easiest ones in the short run but that reward you in the long term. The title Walk Against Wind is taken from Marcel Marceau's pantomime routine "Walking against the wind" and it is about pushing against those forces to be a stronger person, and for personal growth and development...

I found the title fitting for that reason, but also because Marcel Marceau was such an incredible artist. He looked for the bigger picture, to use his art to help people during the Second World War. He was a very talented painter as well and, since he was so good as an entertainer and pantomime, he was great with children. During World War II he used that talent to keep jewish children quiet while they were being smuggled across the border to safety, you know. So sometimes when I teach students, I try to at least explore the concept of what can you do beyond playing well and passing exams in music school, ticking off boxes, that sort of thing. What is the bigger picture? Do you want to bring a sense of beauty in people's lives? Do you want to save a life with your music? I know that sounds very optimistic, but I think it is a good thing for everyone to think about. Especially now that music is so institutionalized. A lot of people go through the same path: you go to this college of music, you study with that teacher etc. That's all fine, but it is important to think about the bigger picture and not lose perspective of why you are doing all that you do. If it is just about passing exams, ticking boxes, you're going to have a short career as a musician...

AAJ: Today, you are one of the most praised young jazz bassists. Are you satisfied with the musical work of recent years?

LMHO: I am proud of the projects I have been on and been a part of. I am proud of this album and I am proud of the music that I am putting together and writing and recording. As a musician there's always room for growth and always somewhere else to go. It never ends. So "satisfied" is maybe not the right word since we are always striving to improve. I feel like there is still a long way to go in my playing and in my writing. So it is a balance between being happy with what you're doing while continuing to push for that next thing.

AAJ: You are a member of the current Pat Metheny Quartet. How did that collaboration come about?

LMHO: I met him when I was playing at the Detroit jazz festival in a band with Joe Lovano and Dave Douglas. Pat was playing on the same stage after us and I met him later backstage and we chatted briefly. Then two years ago I ran into him again, backstage at the same festival, and he asked me to come over and play with him in his apartment on the Upper West Side. So I did. We played duo and then we played some trio with Antonio Sanchez and... yeah, it has been fantastic. Ever since I have learned so much playing in his band and it is such an honor to be playing with someone who is one of my greatest inspirations...

AAJ: Will you continue this partnership?

LMHO: Yes. We'll be touring in the coming months and we have a record that's coming out, which we recorded in December of 2016.

LMHO: For any bassist having a solid foundation, a grounded solidity, is essential. As a leader, it depends on the music that you write. In my music some of the melodies are very intricate but for the most part—the improvised sections—there's a lot of freedom and depending on who you're playing with, sometimes that requires you to step out front and really lead where you want things to go. At times, certain things may not go in the direction that you're trying to push for... But this balance between being that solid foundation in the background and then being able to step forward and push things and pull things your way is very important. For me another very important thing is composition. I am trying to make things interesting and it is a balance between open improvisatory sections and intricately composed sections. Like with everything else in life, it's always a matter of balance. And of course... listening is key.

AAJ: You have a special musical partnership with Fabian Almazan. What are the reasons for this long cooperation?

LMHO: Fabian and I went to the Manhattan School together. We have been playing music together ever since. And we just recently got married last January, after nine years of friendship.

AAJ: Oh, wonderful. Congratulations! Which bass players had an impact on the way you play bass?

AAJ: Who are the younger bass players you prefer?

LMHO: Larry Grenadier, Scott Colley, even if they are a little bit older than me. And then Ben Williams, Matt Brewer... so many great bassists...

AAJ: Do you consider yourself mainly a composer, a performer or a bandleader?

LMHO: I try not to think about them as separate roles. The more I do each, the stronger I get.

AAJ: In your second album Initial Here you play a beautiful Ellington tune "Come Sunday." Do you like standards?

LMHO: Yes, I do. I am still learning standards and I have been getting back to them lately. Learning the melodies but also really living the lyrics as well, because it makes such a big difference to me and how I interpret those tunes. I have found that's very beautiful. Often people encourage you to learn the lyrics but a lot of times you end up learning standards at jam sessions and you don't really have the chance of getting into the lyrics.

AAJ: Are you working on your second trumpet trio album?

LMHO: Yes, with Ambrose Akinmusire on trumpet and Tyshawn Sorey on drums. Hopefully it will be published next year.

AAJ: What do you do when you're not making music?

AAJ: How is today's Linda May Han Oh different from 10 years ago?

LMHO: I practice a lot and try to get better. As I look back, I think about how I used to play and I am proud of my improvements as a composer and a bassist. I have a long, long way to go, lots of things to improve on, but I am happy when I look back. I am happy where I am, playing with great musicians and I get to write music and travel and play. It's a privilege and I am grateful for that.