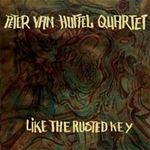 To call Van Huffel a composer, in the casual parlance of jazz, is almost a misnomer. He really composes; almost every piece a tautly structured individual work that provides strong thematic material and impetus for the improvising. The opening "Drift" makes subtle shifts in tonality, working from an initial toy-piano tinkling to cover a spectrum from Far to Middle East and on. The moody "Melancholic" unfolds with a glacial architecture in which sounds and time are suspended, while the closing "Atonement" is at once brooding and radiant, the almost liturgical alto line shot through with the bass' soaring harmonics. It is music of real power, with Van Huffel's alto always possessed of a focused clarity, a vision of linear necessity.

His sense of compositional form and his intense playing are essentially complementary, their interdependence notable on complex structures like "Backward Momentum." Stacken's piano is a source of tremendous momentum, his dense, rhythmically explosive playing sometimes invoking the drive and complexity of early Cecil Taylor. He thrives particularly on the pointillist "Tangent," and in the "Beast" series that arises throughout the CD and which alternately emphasizes tensile formal structures and free improvisation. Perkin is particularly adept at bowed passages and Rohrer is a complete percussionist, whether driving the group dialogues or creating glittering soundscapes with various metal instruments. The band is every bit the equal of Van Huffel's compositions, creating its own continuous dialogue and highly developed identity to reshape the music into a complete and collective expression.