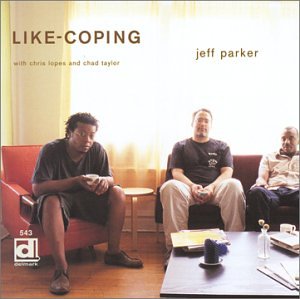 Guitarist Jeff Parker presents what, for lack of a better term, is the new ‘Midwest cool.’ On his first release as a leader (besides the hard to find Vega on the French label Marge), he plays with an authenticity that could be mistaken for intellectualism.

His brand of enlightened swing has strengthened the recordings of bands such as Tortoise, Isotope 217, Tricolor, Aesop Quartet, and the various incarnations of the Chicago Underground. Cognizant of the jazz guitar tradition, Parker neither opts for playing licks nor settling for that tradition. In the setting he has found himself, he has distinguished himself by playing smart simple chords.

Given this opportunity to lead a session, Parker sticks with his cool ensemble conception of jazz. His trio heard here includes bassist Chris Lopes and drummer Chad Taylor, both members at one time of the Chicago Underground band. Where CU dwells on the jamming outreaches of electronic and studio-electrified post-Milesian explorations, this trio finds its niche in more traditional guitar jazz statements.

While it is a guitar/bass/drums lineup, Parker and company mix in subtle effects and noise to remind you this ain’t your father’s jazz. Sure he can play bebop licks—but when he does, he mixes them with the odd sound of watusi music, as on the track of the same name. When Parker plays, you can almost hear his thoughts unfold. He parallels the work of guitarist Jim Hall with infectious swinging hooks, a kind of relaxed rhythm. But he opts for a slightly off-center quirky relaxation. When he does include noise and effects, they are rarely the centerpiece of the music, focusing the listener’s attention continually back on the ensemble playing.

While Like-Coping sounds like a self-effacing modest affair, it actually is a prime example of a fashionable Midwestern cool.