By BUDD KOPMAN
September 25, 2008
Sign in to view read count 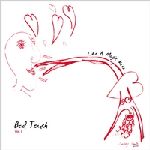 The thoroughly modern, mysterious, beautiful, and yet tough Like A Magic Kiss is the debut of Bad Touch; a collective made up of players who, though still young, have each established themselves as an original with a unique voice. Originally started by saxophonist Loren Stillman, organist Gary Versace, guitarist Nate Radley and drummer Ted Poor, the individual players found that working together towards a real group sound can be just as fulfilling, if not more, than the normal constant flux.

Although short at just over forty minutes, Like A Magic Kiss makes a deep impact due to the underlying cohesiveness of its emotional sound world, while the individual contributions remain discrete. Contrast is created not by the variety of styles and grooves, but also the instrumentation itself, as Stillman's floating, water-wave sax bounces off Versace's very cool organ lines and bass, Radley's hard-edged guitar lines and Poor's propulsive drums.

Followers of Stillman will immediately recognize his musical personality through his sound and the manner in which his melodies combine a sweet etherealness with innate logic and a hint of danger that allows for manifold interpretations and feels. Indeed, the group's very existence could come from Stillman's desire to actualize these contrasting threads.

The last track, "Skin," is a complete reinterpretation of the quintessential Stillman sound from his very beginnings on "Meat Snake," from How Sweet It Is (Nagel Heyer, 2003) or the tune's other versions on Gin Bon (Fresh Sound New Talent, 2004) and Jackalope (Challenge, 2003).

Versace has played with Stillman in his original quartet, alongside seemingly everyone else in New York City and beyond; including such diverse people as Maria Schneider, John Abercrombie and Lee Konitz. While being an adaptive player is a good thing from the point of view of getting work, it might lead one to wonder whom such a player really is. However, such is not the case with Versace, who always filters the needs of the leader through his own musical personality. Radley and Poor have lower profiles, but both are busy sidemen for players such as Cuong Vu and Chris Potter.

Although the compositional contributions on this recording, subtitled Vol. 1, are by Stillman and Poor alone, the playing is evenly distributed, with the sound being the result of what everyone is doing at any given moment. The balance between arranged structure and improvisation is always audible and fascinating to follow.

The intensity never lets up, since it comes from both the rhythmically propulsive compositions of Poor, and the dangerously beautiful compositions of Stillman, allowing Bad Touch to mine many different emotions and vistas. Their music is uncompromising in its vision: that it never accedes in its totality to the commonplace or the expected, all the while remaining very accessible.

When the last track is over, it is clear Like A Magic Kiss has said something. It is a very fine debut album for Bad Touch, with hopes that much more is to come.

Bad Touch; Prelude To The Afternoon of a Magic Kiss; Like A Magic Kiss; Wade; Man of Mystery; Skin.